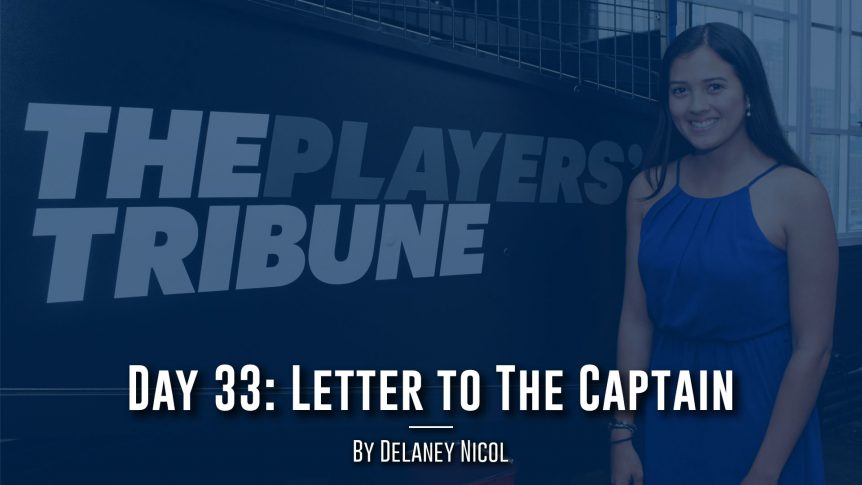 On Thursday, MSBA ‘18 went on our long-awaited Office Field Trip to The Players’ Tribune. I have been highly anticipating this visit since the start of the program, due to the fact that I am one of your many die-hard fans and a huge supporter of your mission. When you launched The Players’ Tribune in 2014, you stated that your main objective was to transform how athletes share information, bringing fans closer than ever to the games they love. Through this platform, you have given athletes a voice to express their stories through first-hand pieces, revealing truths that even the mainstream media doesn’t uncover. After walking through TPT’s offices, we had the incredible opportunity to hear from a panel of four eminent sports business professionals on your TPT team, and we were given a special guest appearance from Cameron Lynch, Linebacker for the Tampa Bay Buccaneers. Cam shared with us his gratitude for TPT and how much it meant to him to be able to get his story out there in the way he wanted it to be told. Like Cam and the other athlete contributors, I have a story that has shaped the person that I am today, and you are a major constituent of it.

One of the panelists mentioned that one of his go-to questions for athletes is, “What’s your first memory in life?” That immediately made me ponder over what my first memory is. Unfortunately, I rely on the home videos that my dad took of my brother and me growing up to recollect on my early childhood, but the one occurrence that I remember vividly was back in 2002 when I was five years old and my dad signed me up for my first T-Ball team. During the practice, I remember my coach rolling me balls at shortstop and doing your famous jump to throw the ball to first base; you were exactly who I wanted to be. When practice ended, our coach brought down a box from his car filled with our team’s jerseys for the season, and I ran as fast as I could to get #2. I may not have realized it at that moment, but wearing that number for my entire softball career made me strive to represent you and what you stand for as best as I could, both on and off the field.

“I feel like I am surrounded by a bunch of Derek Jeter’s at MSBA, and I know that they are going to change the landscape of the industry just like you changed the game of baseball.”

While Mr. November and Captain Clutch are two of your famous nicknames that portray the mark you left on the game of baseball, people remember you for your character, your leadership, and the impact that you made on every individual that you met. I never thought that anyone could ever be in the same ballpark as you in terms of the pedestal that I put you on, until this summer. Meeting everyone at MSBA Orientation, I knew that I shared a common goal with the other 26 individuals in the room, but it did not take me long to recognize that we were all different in that we had unique personalities, diverse backgrounds, and a distinct motivation for applying to MSBA. However, on top of everyone’s desire to break into the sports industry, we share a common attribute: The Derek Jeter Mentality. I see so much of yourself in the 26 individuals that I am so fortunate to be surrounded by every single day for eight weeks this summer, and I wanted to share with you the ways in which your character is reflected through the next generation of sports business professionals.

Work Ethic: Although you were a natural-born baseball talent, it’s not up for debate that your hard work led to your decorated career. My favorite quote of yours is, “There may be people who have more talent than you, but there’s no excuse for anyone to work harder than you do.” The MSBA family’s current rise to stardom did not happen by chance either. Each individual in our program has worked tirelessly to make a name for themselves and build valuable relationships in the industry. Every day, our group wakes up and grinds from 8 AM to 9 PM at work and MSBA events, and then schedules time on our own to meet and learn from other successful professionals in the industry. Like you, MSBA ‘18 is willing to put in the time when nobody is watching to ensure success.

Team-First Mentality: The name on the front of the jersey always mattered most to you. You had your teammates’ backs in times of adversity, and countless individuals relied on you for encouragement on and off the diamond. I have never met people more willing to help than those involved with MSBA. Whether it’s your Mentors spending time with you, your classmates introducing you to their network, or the MSBA Staff giving us insight and advice, everyone is so selfless and fueled by the group’s success.

Passion for the Game: Nobody cared more about winning than you. You wore your heart on your sleeve and treated every game as if it were your last. To be in MSBA, it takes more than being a sports fan. This group is fully invested in learning about every part of the industry and becoming experts in their fields of interest.

Leadership: It takes a true leader to be coined the Captain of the New York Yankees. You made the Yankees your team at the start of your young career. I’m sure that the 26 individuals that I am entering the industry with are going to be leaders of big sports companies in the near future. They are each creating their own lane every day to find their path in the industry.

Let Success Speak for Itself: As a player, you were one of the most guarded athletes when it came to speaking to the media. People frequently doubted your abilities, but you saw this as a challenge and your reward was proving people wrong. In the sports industry, many people don’t make it and are told that they’re not good enough. Despite the adversity that some of the people in MSBA have gone through, they let success speak for itself and remain humble despite all the noise.

Ability to Deliver When in the Spotlight: People call you Captain Clutch for a reason; you never failed to deliver in the big moments (I still watch the highlights of your final game at Yankee Stadium and get the chills). Whether it’s a Speaker Series, Office Field Trip, or a Career Workshop, I am constantly impressed by the intellectual thoughts and questions that people in MSBA bring to the table. Even around some of the biggest names in sports business, the group is consistently adding value.

Loyalty: Being the leader of the most historic franchise in sports for 20 years, you always stayed true to the Pinstripes and to everyone in the Yankees organization. I have known the MSBA family for five weeks, and yet they are some of the most loyal friends that I have ever met. You were the one who preached to “surround yourself with good people – people who are going to be honest with you and look out for your best interests.” The MSBA family is exactly that, and I feel so lucky.

Character/Personal Brand: Above all, you always carried yourself with class. You added your own personal touch, cultivated meaningful relationships with so many people in and out of baseball, and gave back. This summer, we have each worked on developing our personal brands, and I believe that the best attribute of every MSBA participant and intern is the high character that they display each day.

So Derek, when I went to your retirement ceremony on May 14, 2017, I knew that the sports world was losing a legend and that your legacy would always remain unmatched. However, MSBA introduced me to 26 individuals this summer who I believe portray you best. I feel like I am surrounded by a bunch of Derek Jeter’s at MSBA, and I know that they are going to change the landscape of the industry just like you changed the game of baseball. I know your legacy will always live on with this group, and when we’re retiring, I can’t wait to see all the people celebrating the impact that we had on them in the sports industry, just like the sell-out crowd that gathered to celebrate you on May 14th.

Thank you for paving the way ever since I picked up a ball for the first time on that night in 2002, and keep a look out for these MSBA kids – they’re going to leave their own legacies too one day.