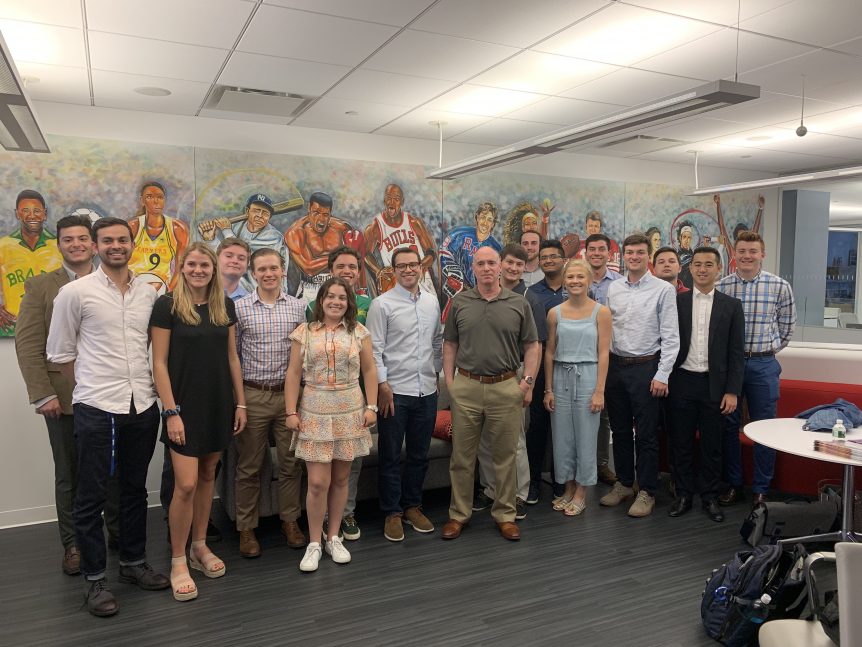 These past couple of weeks have been everything but normal. From graduating at Boston University in mid-May to starting MSBA weeks later, the transition from college student to “adulting” is very real. Along the way, so many ask about post-grad opportunities, with this one frequent suggestion: “forget about pay. Just find a job you love…” or something along those lines. Even as I hear it from them, I wonder if they work at their current position because they genuinely love it, or because they love the life that comes from it. Luxury. Money. Notoriety. Still trying to figure out what I want to do in the real world, I treat every Speaker Series as a chance to see what sports mean to me: a career filled with optimism, or something I’d rather casually talk about over drinks with my closest friends and family.

On Day 4 of MSBA, our class traveled to 640 5th Avenue, home of Taylor Strategy, an entertainment and sports PR firm. We were able to meet Bryan Harris, COO and Managing Partner, and Alex Izen, Digital Consumer Analyst. Like much of society today, Taylor Strategy has adjusted to this constant technological evolution. Gone are the days where all PR experts did was write quality press releases and establish positive media relations. With the advent of Facebook, Twitter, and Instagram, more PR jobs exist now than ever before. Bryan Harris even admitted this: 5 to 10 years ago, jobs for people like Alex Izen didn’t exist. Now, the demand for social media experts like Alex has never been greater.

Bryan Harris and Alex Izen are predominantly different. The former is a PR veteran of over 30 years, the latter a Millennial. Bryan Harris had to learn and adapt to social media; Alex Izen grew up with it. Despite these major career differences, it all connects back to one essential commonality: they both love sports.

Prior to Taylor Strategy, Bryan Harris was an anthropology major in college. He was more interested in being Indiana Jones than Cal Ripken. During college however, he had an epiphany: although he loved anthropology and archaeology, he wanted to pursue his real passion: sports. After an internship at NBC sports, Harris learned under his boss and mentor, Mike Cohen. Once he graduated college and began applying job, Harris began his professional career under Cohen, who hired him to work full-time at his new company.

Alex Izen could’ve gone down many career routes. While studying at the University of Michigan, Izen interned everywhere from law firms to real estate companies. Even though they were interesting and great experiences, it didn’t ignite his creative flare. During his senior year at Michigan, Izen went down a different route and interned with a small marketing firm in its social media department. From there, his interest in social media analytics grew; after one year at his internship, Izen moved to his home state of New York, working for Havas Media. He then went from Havas to Taylor Strategy, where he feels right at home as a Digital Content Analyst.

Outside of their passion for sports, the biggest thing that stood out to me about Taylor Strategy was something Bryan Harris said towards the end of the night. A student had asked him what were some aspects about his job that he didn’t like. Almost immediately, he quipped, “where do I begin?” Although he loves PR and the work he does, he was honest in admitting that not every day is perfect. There are times where he needs to use his creativity and intuition but, as the company’s COO, he has to now wear a management hat. It’s something his job requires, but not necessarily he would like to do.

That is when he delivered the most honest, yet important, quote of the night: “Don’t expect to love every minute of job.” With many people telling me recently that they wish they loved their job, it made me stress out about never finding something I enjoyed 24/7. Listening to Bryan, however, I saw that even though he loves PR and his career, it is never perfect. As he said, you know you found the right job where the big, memorable moments outweigh the sluggish, lackluster ones. Going forward, I want to apply this to my job search. Even though I love sports, there are going to be days where I question why I’m in it. While every day is bound to differ, I know that I do the same thing every moment I wake up and go to sleep: open up the ESPN App, without hesitation.