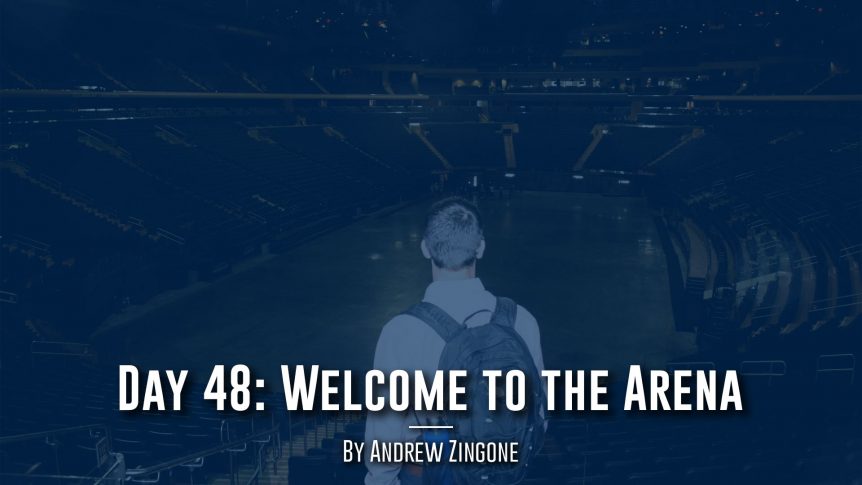 “It is not the critic who counts; not the man who points out how the strong man stumbles, or where the doer of deeds could have done them better. The credit belongs to the man who is actually in the arena, whose face is marred by dust and sweat and blood; who strives valiantly; who errs, who comes short again and again, because there is no effort without error and shortcoming; but who does actually strive to do the deeds; who knows great enthusiasms, the great devotions; who spends himself in a worthy cause; who at the best knows in the end the triumph of high achievement, and who at the worst, if he fails, at least fails while daring greatly, so that his place shall never be with those cold and timid souls who neither know victory nor defeat.”

As we walked around Madison Square Garden during our seventh and final Friday Office Field Trip, I couldn’t help but draw comparisons between “The World’s Most Famous Arena” and the arena that we, 27 soon-to-be MSBA graduates, will soon find ourselves in.

Thanks to the recent renovation, The Garden is now a museum and shrine to the greatness that has occurred within the historic structure. Some highlights include:

“This group epitomizes Teddy’s “Man in the Arena”. I cannot wait to see what failures and successes lay before this group of professionals as they continue their battle in the arena.”

Like coins, each of these great achievements have a flip side. For every success there is a failure. The Rangers’ incredible win brought another painful end to the Capitals season and fed critics’ theories of Ovechkin and company not having what it takes to win in the playoffs. With Frazier’s triumph over Ali, the great Muhammad Ali suffered the first loss in his career. However, like the greats before and after them, these losses fueled these athletes’ respective internal fires. Muhammad Ali finished his career with the nickname “The Greatest”, while Ovechkin went on to hoist the coveted Stanley Cup.

Breaking into the world of sports business is not easy; on the contrary, it is damn near impossible. For every success story, there are thousands of people who dream of a career in the sports world but choose a safer, less stressful path. However, whether you are aware of it or not, by joining MSBA you have entered the arena. As Teddy Roosevelt so elegantly put, by entering the arena you have accepted the challenge of pursing something great, and, likewise, you have not only accepted the success that will come, but also the failures that will knock you down.

The non-MSBA members who are reading this post may not fully understand the work that goes into being a participant in this program. A basic day consists of very little down time and demands the very best out of every member of the program. In my last blog post, I talked about how each member of this year’s class has taught me something different and brings something unique to the table. Now, I want to mention the common thread that connects us all. This commonality is a desire that comes from within each and every one of us – a desire that burns to succeed in this industry. This flame is contagious and only grows stronger as this group of men and women have become a family. I have learned many things this summer, but the biggest lesson was that, in order to succeed in the sports industry, one must enter the arena and forget about the critics. There will always be a reason to give up, but my classmates, my newfound family, have taught me the importance of holding onto the dream of success and giving it your all.

This group epitomizes Teddy’s “Man in the Arena”. I cannot wait to see what failures and successes lay before this group of professionals as they continue their battle in the arena.