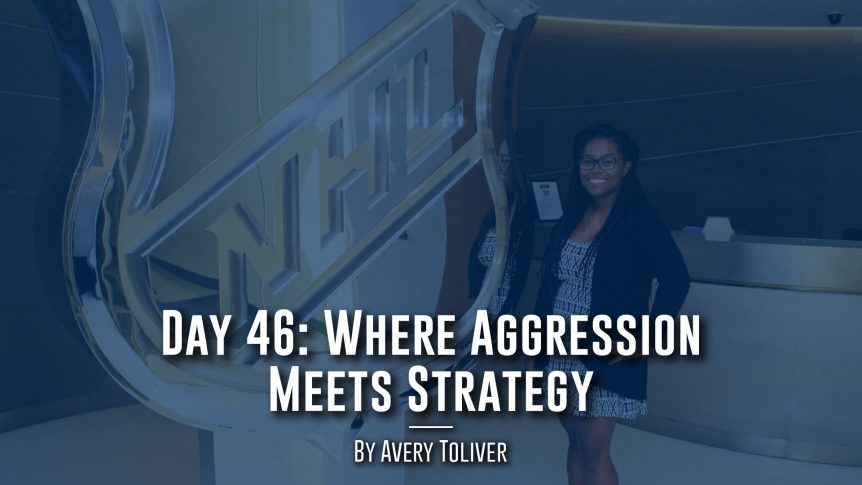 It’s the second to last Wednesday, which means my time at MSBA is coming to a close. It also means that it’s almost time for me to say goodbye to these 26 individuals (yes, John and Grace are included in this crazy family) who have made my time in New York better than I could have imagined. In the past seven weeks, I have visited companies that I could have only dreamed of, such as the NBA, CSM LeadDog, and DKC to name a few. This was especially true on our Wednesday visit to the NHL. A little-known fact about me is that I am actually a huge hockey fan. Yes, you heard that right. An African-American girl from Texas somehow became a hockey fan in a state that considers football a religion and basketball an official pastime. I can still remember settling into the Toyota Center and seeing the Houston Aeros, Houston’s AHL team, take the floor and being captivated by a game that is just as aggressive as it is strategic. While the Aeros are long gone from Houston, and I hope one day we will get another team, I now spend my time rooting for the Predators and, occasionally, the Blackhawks. My passion for hockey at any level still remains.

“Not only has MSBA given me the opportunity to gain skills and connections that will assist in my career, but MSBA has also given me the chance to meet and become friends with the next Wayne Gretzky, Gordie Howe, P.K. Subban, and Hilary Knight of the sports business world.”

As I mentioned earlier, hockey is a game that requires its players to be aggressive as well as strategic. It requires its players to put the greater good of their team before their own. Those who play the game are, in my opinion, some of the toughest men and women to walk the planet. And while every sport is challenging in its own right, hockey is something you have to work at a little bit harder to be the best. These same points used to describe the game of hockey can also be used to describe what it takes to make it in the sports industry. In order to make it, you have to be strategic, make connections when and where you can, be able to sell partnerships, or convince an athlete or a brand to sign with your agency. You have to be assertive, making sure that your voice is heard, push boundaries that you did not know existed, and make a name for yourself in an industry that is just as fierce as it seems. You have to understand how to work as a team because with a collective behind you, the ideas you can create are limitless, whether they are for a pitch, a promotional event, or for shaping the way consumers will begin to view sports. You have to be tough because there will be those late nights when you are working hard to finish a strategy for a specific account, not being able to close a deal, or trying to find different and creative ways to sell the last of your allotted seats. These are the skills that, for the past seven-and-a-half weeks, have been drilled into my head as well as the heads of my fellow classmates. These are the skills that we have had seven-and-a-half weeks to hone and perfect as best as we can. These are the skills that, as we continue to progress in our sports careers, we will carry with us and continue to work on until we can say that we have all reached our Stanley Cup moments.

If I haven’t said it already, thank you David, Lorne and Bailey for giving me this opportunity. Not only has MSBA given me the opportunity to gain skills and connections that will assist in my career, but MSBA has also given me the chance to meet and become friends with the next Wayne Gretzky, Gordie Howe, P.K. Subban, and Hilary Knight of the sports world.