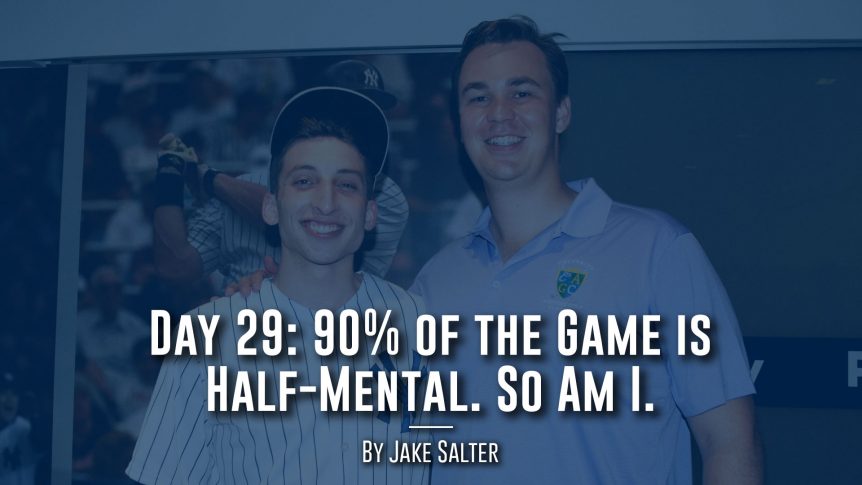 “There is in every madman a misunderstood genius whose idea, shining in his head, frightened people, and for whom delirium was the only solution to the strangulation that life had prepared for him.”

In order to be truly great at something, at anything, you have to give in to a certain amount of madness.

A lot of the time, it’s not about what you’ll do to actualize your aspirations – it’s your mentality and your willingness to sacrifice and to push on. When something is truly important, however improbable it might be, you do it.

Many 20-somethings are choosing career paths so they can buy a Lexus by the time they’re 30, for some perceived sense of status, or even to pay off their college loans (ironic, right?). Some want to retire by the time they’re 40 and go sit on a beach somewhere with an adult beverage. That’s crazy to me.

“You can observe a lot by watching.”

There is an interesting dichotomy that has become observable in my time with MSBA: most of the people I know in finance, banking, etc., never talk about their work if they don’t have to. They are counting down the minutes ‘til they can clock out and the hours ‘til Friday when they’re “free.” The folks I’ve met through MSBA and my prior experiences in sports/entertainment to date are the complete antithesis: they can’t wait to tell you about what they’re working on, an idea, or anything relevant to the industry. It’s a dynamic I am so grateful to have been exposed to.

It gets easier. Everyday it gets easier, but you have to do it everyday. That’s the hard part.

Half the battle is showing up sometimes. All you can ask someone to do is put you in a situation to succeed, and Lorne, Bailey, and David have gone above and beyond on that front.

It was hard waking up for school, always had been, but this is a different kind of learning experience – one that is easy to get excited about on a daily basis. It’s the weirdest combination of hard-and-easy. Maybe easy isn’t the best word – natural might be more accurate.

The tale of Sisyphus tells the story of a Greek king who exaggerated his importance and was punished by the gods to roll a rock up a hill every day, only to have it roll back down and do it again the next day.

“90% of baseball is half-mental. The other half is physical.”

Since June 10th, the first day of MSBA, I have walked more miles than the hours of sleep I’ve gotten (not hyperbole). This is New York though – that’s nothing special.

Although I didn’t fully recognize it at the time, some of my most valuable work experience isn’t anything you’ll ever see on my resume. I bussed tables for four years. I hated it, man. It seemed like so much time and effort on top of my academic obligations, basketball practice, and my responsibilities with the Sea Dogs. I was doing it for the money, but money comes and goes – discipline is enduring.

During my gap year from Fordham, I went crazy. I mean … I was already crazy, but a new kind of crazy. It was trials and tribulations, a mental test of sorts. I balanced three jobs, none of which I enjoyed even a tenth as much as I enjoy working for Cogent this summer. It was a different kind of grind. One of those jobs wasn’t even really a job, it was temporary labor. I had to wake up at 6:00 in the morning, get there by 6:45, and travel an hour-plus to a work-site if I wanted to get an assignment. The jobs at the temp agency were all hard labor: construction, demolition, you get the idea. I haven’t really hated a lot of things in my life, generally it’s a waste of energy, but I dreaded waking up in the morning to push a rock up a hill. There were times I legitimately didn’t know if I was ever going to get back to New York. I’d never been that miserable (ask my family, they’ll tell you), but I put my head down and kept on keeping on, not that I had much of a choice. Churchill said, “If you’re going through Hell, keep going.” That’s all you can really do sometimes; you have to step back from something before you understand (shout out Impressionism).

All I can say is that you certainly won’t catch me complaining about the long days in the city, or the three hours of daily public transportation. You just might catch me grumbling about 90% humidity though, but anything pertaining to MSBA or the grind? No way, man. Like I said, I’m nothing special for working hard, everybody in New York hustles. Lorne, Bailey, and David have helped me work smart.

“When you know how to think, it empowers you beyond those who know what to think.”

Life, liberty, and the pursuit of happiness are the unalienable human rights listed on the Declaration of Independence. The notion of liberty being unalienable is laughable to me because you can so easily lose your freedom if you’re not careful. Some people never had it to begin with. Belief structures are learned and people from all walks of life take what’s given to them and conform their dreams, and their willingness to bet on themselves, based on social norms; they get stuck. So many people are conditioned to doubt, to compromise their vision, to be regular. For that reason, a majority of the workforce in the United States is, well, miserable.

The term “the pursuit of happiness” can give the impression that you’re supposed to look for a pot of gold at the end of a rainbow … a finite answer to infinite questions. Happiness is not attainable. It’s something you create, a skill you develop. A journey, not a destination. That’s what makes it fun; it justifies the madness to a degree. To me, success is taking joy in the process, not just what it yields. The hustle is both the means and the end, a perfect duty (Kant).

It takes relentlessness to deal with failure. I’ve already had my share of noteworthy missteps even just this summer (professionally and personally). But hey, one of the greatest players to grace the hardwood once said, “I never lost a game, I just ran out of time.” No, no, I know what you’re thinking, it’s not Lavar Ball. MJ. Dude got his a— kicked by the Pistons every year in the late 80s (and also lost to them in basketball) and he kept coming back, stronger every time, and, eventually, he won.

“There’s only one way to get good at anything; you surround yourself with the bad mother—ers who are doing exactly what you do and you force yourself to keep up and inspire each other.”

Before the program, I looked at time in a binary way, meaning you can spend your time or you can invest it. Thanks to the Class of 2018 and the people I work with, my eyes have been opened to the possibility reality that these are not mutually exclusive. I’ve been spending an enjoyable portion of every day with the same squad, but at the same time that time feels like an investment. Not one that I’ll ever fully cash out on, or ever think about solely in terms of serving me or advancing my career, but rather one I will continue to invest in and cherish, this summer and beyond. Time well spent.

My high school English teacher, Ms. Mahar, used to tell us on a regular basis that we’ve never had a truly original thought in our lives, and never would. At first, this bothered me. I wanted to be unique. After enough life experiences, that idea became reassuring to me: the world is filled with inspiration, especially if you look in the right places. That’s why I like quotes and use them in my writing when I can.

Most regular people don’t make it in sports. None of my 24 MSBA classmates are regular; that’s probably one of the reasons we get along so well. Everyone is an individual, and a unique one at that. That’s probably one of my favorite aspects of MSBA: the diversity of thought inherent in the program. I’ve had so many great conversations: a lot of them deep, some of them … not so much. Just a couple nights ago, a few of us were debating Stefon Diggs’ ranking when it comes to NFL wideouts (my guy Tarik is a Vikings fan), and Matt Schasel (a gem of a kid, truly) casually starts talking about Laquon Treadwell, the 3rd (maybe 4th) wide receiver on their depth chart. It took me a few hours to appreciate that because it’s not like it was a big focal point in the conversation, but when I had a minute to reflect, I was grateful to be able to have intellectual conversations about sports with a bunch of kids who know what the hell they’re talking about.

There are peaks and valleys and all that good stuff. It might be a little cliché, but it’s true. The height of your peaks is facilitated by the depth of your gratitude. These people are people I don’t take for granted, people I would want in my corner every time. The MSBA fam is nuts, but that’s why I like ‘em. I can only hope that all of us stay close long past August 4th. Shout out to the pre-MSBA support squad too. Y’all are essential.

Anyways, I gotta wrap this up so, in conclusion, don’t be a sheep! If you want to settle for regular, go for it, but that’s not me.