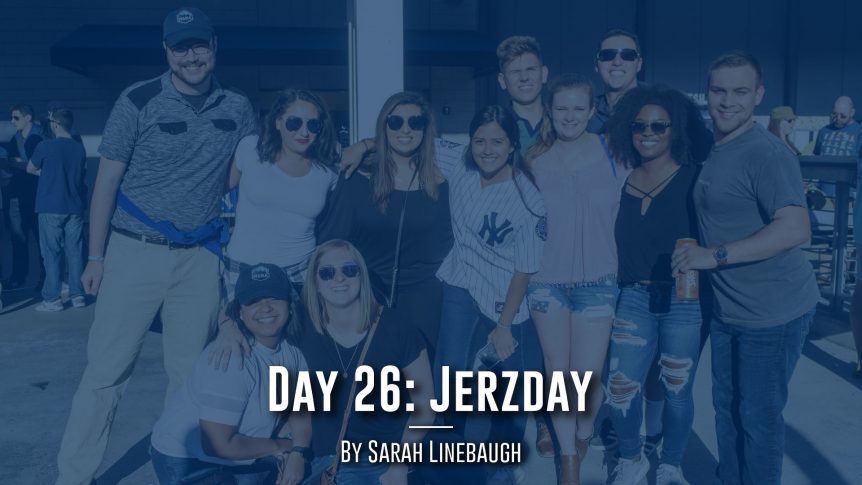 After experiencing Fourth of July and the Macy’s Fireworks Display in the city for the first time ever, I decided that one of my remaining days had to be spent at the Jersey Shore. After the fireworks, I raced home to sleep so I could be up bright and early for the beach. I drove to the beach with some of my very best friends, who I don’t get to spend a lot of time with due to my work schedule and the fact that we all go to college in different states. I knew had to make the most of this day, like I have been doing for all of MSBA so far, because I wouldn’t be seeing them for a while.

Once arriving at Belmar, I could feel the ocean breeze on my skin and smell the salt water and I knew this was going to be the perfect day. My friends and I set up our towels and umbrellas and headed straight for the water to cool down on what was already turning out the be a hot and sunny day. After swimming around for about an hour, we all headed back to our little camp to do some tanning. After talking for a little bit, we all fell into a silence absorbing the summer sun, which gave me a chance to reflect on my crazy summer thus far.

“I don’t just want to be another drop in the ocean. Instead, I want to make waves and be noticed.”

I’m not going to lie, but this summer has been rougher than I had expected. Not so much because, as a group, we have been insanely busy between internships, Speaker Series events, and Office Field Trips (oh my!), but more the mental toll this experience has taken. I have never been more unsure of anything in my life and second guessing almost everything I have been doing, but Speakers such as Jason Belzer and Alex Rosen, and Office Field Trips such as Cogent, Leverage, and Fanatics, have challenged my way of thinking and forced these thoughts into my head. I have learned that, while the unknown is scary, you need to learn to suppress that fear or you will be so overwhelmed that it will prevent you from accomplishing what you want to do in life.

As for the second half of our summer, I am excited for the upcoming Speakers and Office Field Trips. I have some phone calls and meetings lined up in the coming week with some previous Speakers to pick their brains and create a better gameplan for my future. My biggest goal for the end of the summer is to create a plan (or several) to map out what I need to do during the rest of my time at Temple and some of my future. I am a person who needs a plan and, while that plan may be adjusted several times, it will help suppress my fears. I want to gameplan some options for potential internships I can apply for while still in college to further separate myself.

As I stood up from my towel and walked back towards the ocean, I realized I don’t just want to be another drop in the ocean. Instead, I want to make waves and be noticed. While MSBA has been challenging my way of thinking, I know that I won’t just be a drop in the ocean, and while I may not be making big waves yet, I have started to create my own waves. With a little bit of wind, those little waves will become huge.

After a few more hours of swimming and tanning, it was time to pack up and head home. I did a little bit of shopping and went out to dinner with my parents and friends just like old times. We reminisced on our high school days with some war stories and laughed until we couldn’t breathe. Our night ended hanging out in a McDonald’s parking lot, eating ice cream, and sharing more smiles and laughs. I headed home that night with the biggest smile on my face and the happiest I had been in weeks, ready for the awesome weekend ahead that would be spent at Luke’s lake house with most of the MSBA class.