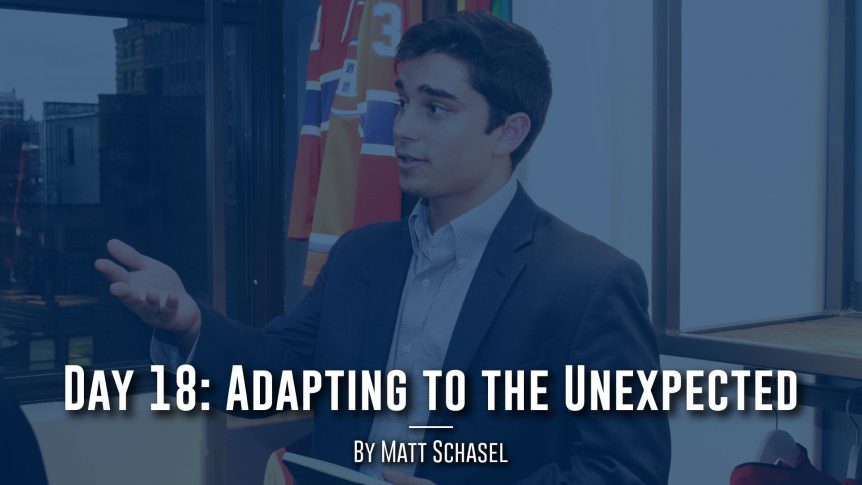 Punctuality has never been my strong suit. Whether it’s due to being held up with essential work operations, or a lack of time management, I am no stranger to being in a rush. This was no more evident than when our MSBA group traveled to the Fanatics NYC headquarters, deep within Midtown Manhattan. The plan was to arrive by 5:40 pm, so we could arrange ourselves before heading up to the office and meeting with four company representatives. I arrived at 6:20 pm.

Unfortunately for me, the term “fashionably late” did not apply here, even considering Fanatics is a licensing and merchandising retailer, and we were meeting in their new product show room. Upon arriving, I appeared to be late as a result of poor time management. However, this was more a result of my extended commute coming from my internship at the United States Tennis Association. With the office located in White Plains, I traditionally face a hefty commute back into the city, leaving me with little to do to manage my commute time, apart from consistently making the right trains (which is easier said than done). While I could potentially leave work early every day, this would not be a trait that I would be keen to be known for.

Uncertain of how my tardiness affected my image among the Fanatics fanatics, I knew I had to make a positive impact on the event, at the very least, to ease my own psyche. This is when inspiration hit me, in the form of Michael Gary Scott.

I was able to combine this with advice from a variety of Speakers that have come through MSBA, all reiterating the need to be proactive over reactive. Therefore, with all due respect to Mr. Scott, I decided to modify his insight while applying it to my situation at Fanatics.

I had to adapt to my lateness, understanding that I could only make the best of the situation from the time of my arrival moving forward. Instead of reacting, I was proactive in introducing myself, asking a question, and engaging in light banter with one of the Speakers, a Duke alum. I was then able to re-adapt to the advice they gave me, while establishing my presence in the room, and demonstrating my value within the event. I did so aptly, as it engaged the Speakers and our group, while advancing the topic of discussion to talks about industry innovation.

While I am pleased with how I was able to adapt to my flawed circumstance of showing up late, I am attempting to increase my proactive abilities and find the proper balance between putting in my time at work, thoroughly, diligently, and presently, while also being able to show up early to networking events, as to preserve my image in the eyes of my peers as well as those that I hope to make my peers one day. After all, you miss 100% of the shots that you don’t take.