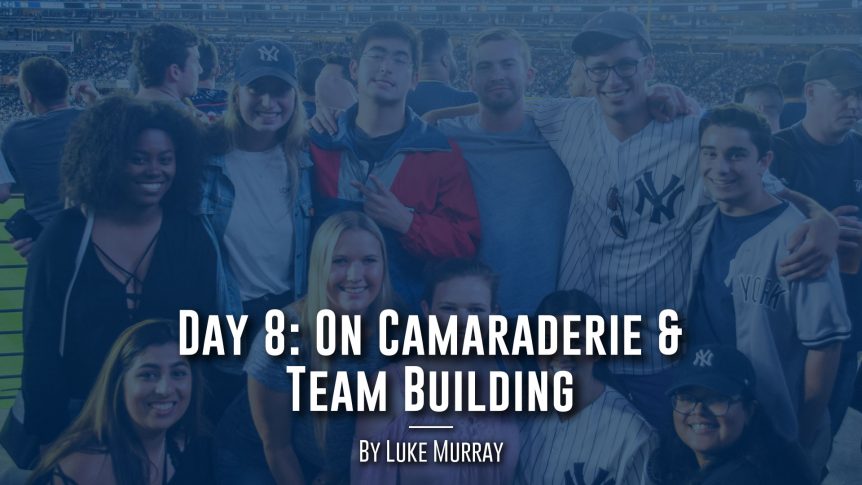 Much is said about the importance of teamwork in all walks of life; sports, academics, work, social interactions, and family all have instances in which teamwork is an instrumental tool in advancing the interests of the individuals and the team they make up. No industry is as aware of the importance of teamwork as the sports industry, and that’s natural, isn’t it? The team on the field isn’t the only one that makes sports happen. The marketing team, the sales team, the legal team – you hear any group of people behind the scenes in sports working towards a communal goal referred to as a “team.” At my internship with Madison Square Garden, almost every email I receive starts with the greeting: “Hey Team!!” (exclamation points most definitely included). In my Management & Human Resources course this past spring at the University of Wisconsin–Madison (On Bucky!), we spent almost three weeks discussing the importance of teams and the ways in which groups of people transition into a true team. One of the methods we discussed, and the one I most believe in, is developing professional teams through social means. I’ve always been someone who believes there needs to be more to life balance than work and professional goals; however, I love the idea that personal lives and professional lives do not need to be separate, and in fact an interaction of the two can be beneficial to a healthy life balance. When I worked at a Deli in Colorado, my co-workers were also my best friends and we hung out every day. When coming into MSBA, I wanted to develop our “team” through similar means. “Relationship building” is a term that’s thrown around a lot here at MSBA, so this is a story about how we’ve already done that amongst ourselves.

“We all fell into what has proven to be a natural team, and the fact that, after a mere week, I feel just as comfortable with this amazing group of people as I do with many of my longtime groups at school and elsewhere is really something incredible worth celebrating.”

Group relationships are hard to build in a life where most work from 9AM-5PM, commute from 8-9AM and 5-6PM, and attend MSBA programming from 6-8:30PM every day. That’s why, when I offered to host MSBA participants at my family’s lake house in New Jersey two hours from our dorms, I knew it was a tough ask. Who wants to get up at 7AM on a Saturday and travel for 2-3 hours following a week like the one I laid out above, no matter how fun the ensuing day might be? What I love about MSBA so far is that, as it turns out, a lot of people do. Over the last two weekends I have had an amazing time getting to know two entirely different groups of ~10 MSBA’ers. We made the haul together and, for a moment, forgot the “concrete jungle” of NYC (which is a term that, as a tri-state area kid, I truly resent because it really undersells the beauty of NYC) in favor of lakeside beers, BBQ for lunch and dinner, and getting violently thrown off of a hot-dog shaped tube being pulled by a boat. Mind you, it was everyone but myself learning how sore you can get from tubing and waterskiing (gotta have a captain, right?).

I learned things about my peers on these trips that I would otherwise not have had the time to if we stayed in the city as was so tempting, especially for those who haven’t grown up around the city like I have. I learned that Avery is trilingual (or perhaps quadrilingual? Ask her yourself and hear an amazing story!); I learned that Christian is far better at talking about sports betting than actually coming out on top, and needs a new confidant on the subject; I learned that Peyton’s susceptibility to sunburn knows no bounds; I learned that my own shortcomings with memory are not unique, as evident by Sarah’s 1AM drive back to my house thinking she had lost her wallet when it was, in fact, in her car the whole time. Most importantly, I learned that my experience as a sports fanatic, and my passion for securing a job in this industry, is one that is so strongly shared by the other members of this program that it would be no time before we all felt like we were an old group of friends simply reuniting with new stories to tell.

During the first trip two weekends ago, we all sat down for dinner and great conversation. That conversation was interrupted by my dads corny “clink the wine glass” toast signal, where he commented on how cool it was that a group of people who had just met (“but we’ve been talking on GroupMe for weeks!” was my retort) could come together and have such great time right off the bat. For how corny that toast of his was, it was also true. I’ve moved around a lot in my life; I’ve restarted my social life time and time again, having to reevaluate my place in a group and how to conduct myself within a group dynamic. However, at MSBA there was no “storming” phase, as organizational expert Michael Porter would describe the period of time where people figure out the group and their roles within it. We all fell into what has proven to be a natural team, and the fact that, after a mere week, I feel just as comfortable with this amazing group of people as I do with many of my longtime groups at school and elsewhere is really something incredible worth celebrating. So here’s to many more ball games, after-work drinks, late nights in the dorms, days in the concrete jungle, and weekends on the water with a team of people who care a lot, have a ton of fun, and are well on their way to becoming amazingly successful and genuinely good people.