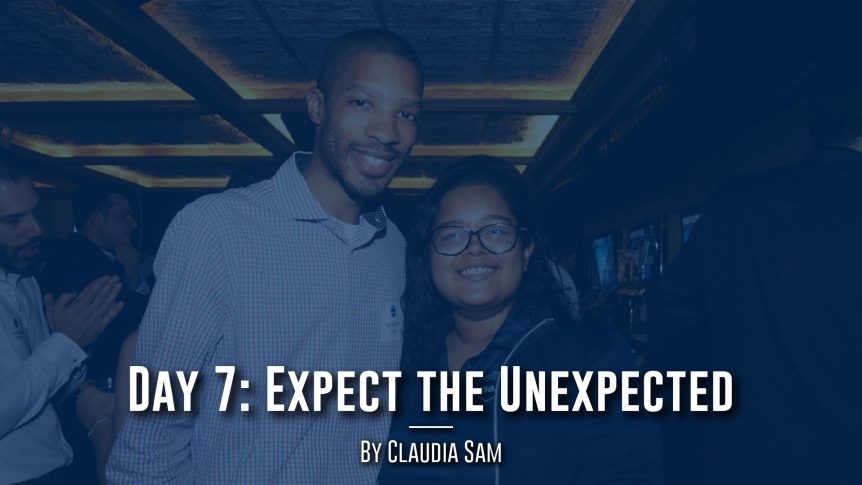 Going into MSBA this summer, I had a lot of expectations. It’s safe to say that this first week alone has exceeded all of those expectations. I could not have asked for a better group of people to share this experience with. As our Alumni Mixer was coming to an end and the Yankees were heading out to the field for the 9th inning, I thought to myself, “Wow there’s seven more weeks left of moments like these,” and I just could not stop smiling. Three months ago sitting in my dorm, I would’ve never thought that I would be having dinner with Kate Girotti and Ashley Daniel from BSE Global and the NFL respectively.

“I’m appreciative of all who have committed to sharing their experiences with us through the Manhattan Sports Business Academy and thankful for everything I’ve learned so far. In just one week, I’ve met countless professionals in the industry and shared invaluable moments with my MSBA classmates.”

The first day of programming, when David Oestreicher came to speak to us, was the first day I was truly overwhelmed. I had forgotten my laptop at home, I had forgotten my notebook at the office, and it had finally dawned on me just what my internship position really entailed. Self-doubt began to take over and I began to think that I wasn’t quite ready for what I had on my plate this summer. As soon as I got home I remembered Lorne reminding us of the Student Playbook they had put together, containing a “Guide to Being a Great Intern.” I was pretty much looking for anything that would make me get out of my own head, and the tip “take control of your own success” resonated with me the most. It was a reminder that I have all of the tools to succeed and to be ready to give 110% in everything that I do. When I first started my internship (a week prior to MSBA Orientation), I felt an abundance of emotions that I couldn’t quite pinpoint but the most identifiable one was definitely nervousness. After all, interning in New York City, being a part of MSBA, it was clear that we were in the big leagues. That feeling still hasn’t quite dissipated, but after experiencing my first week at MSBA I know that everything I’ll learn this summer will not only help me in my endeavors but in my self-growth as well.

I look back on my second week at DREAM, where the development interns and I helped in the set-up of the charter school’s high school graduation. After all of our organizing and assembling, we stayed for the ceremony and all of the underclassmen were there with their baseball/softball uniforms waiting to congratulate the graduating class. The anecdotes from the graduating students all had a common theme: baseball. They spoke of their teammates and the support they’ve offered each other over the years, as well as the beauty of being united towards one goal and how it brings a community together. It was at that moment when I began to reflect on how sport can have such a positive effect on youth and a community at large. I realized just how lucky I was to be part of something bigger than myself and how it was MSBA that facilitated all of this. One thing I’ve heard numerous times from Mentors and Speakers this past week is the notion of paying it forward and taking what they’ve learned and passing it onto us. I’m also reminded of that when I see staff members at DREAM who have also graduated from the charter school. It’s surreal being a part of both organizations, and knowing that there are still so many bases to cover this summer is incredible. I’m appreciative of all who have committed to sharing their experiences with us through the Manhattan Sports Business Academy and thankful for everything I’ve learned so far. In just one week, I’ve met countless professionals in the industry and shared invaluable moments with my MSBA classmates. Just having the opportunity to visit offices in the Empire State Building, going to a game at Yankee Stadium, and listening to people like David Oestreicher talk to us about his career make me excited about what’s yet to come.