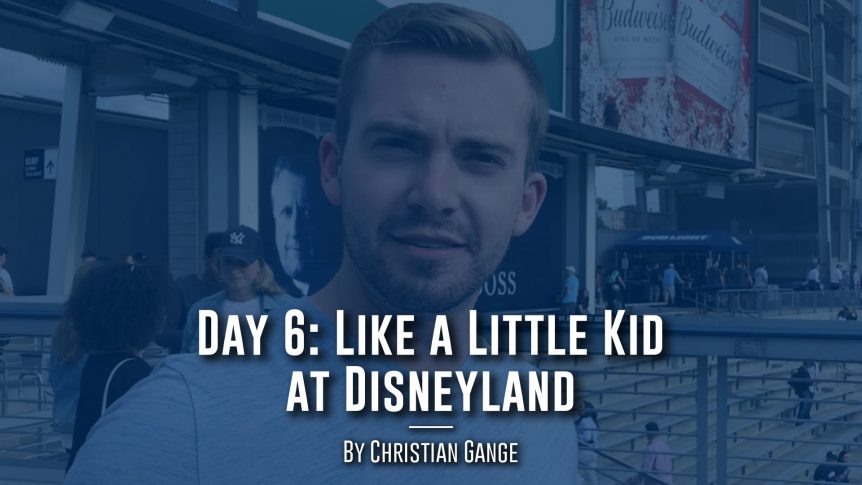 For my entire life sports has always been my true passion. My mom loves to tell the story about how I taught myself how to read when I was three years old because I wanted to read the sports page in the newspaper. And while I have strong interests in every sport, there has always been one that stood out over the rest: baseball. Growing up in San Diego, California, I have always been and will always be a diehard San Diego Padres fan. Even though we haven’t sniffed the playoffs since I was 10 years old, I still grew up loving players such as Trevor Hoffman, Jake Peavy, Khalil Greene, and many more. But if there’s one thing I love more than the San Diego Padres, it is baseball in general, and as a baseball fan there’s been no franchise like the New York Yankees. I am 100% on the side of being a hater of the New York Yankees but despite that hate, it was always my dream to wear the pinstripes and play in the same stadium as all of those legendary Yankee teams. While the dream to play for the Yankees died many years ago, all of those childhood feelings came back when I finally got to step into Yankee Stadium on Friday night. Going to Yankee Stadium has been on my bucket list for some time now, and the feeling of walking into that stadium for the first time, seeing all of the retired numbers and championship flags, can only be explained as being like a little kid walking into Disneyland for the first time. That same magic that a child feels when he sees Sleeping Beauty’s Castle upon first stepping into the most magical place on earth is the same feeling I had when we walked up the steps and saw the field for the first time.

“As MSBA continues to open up more and more doors for me, I keep pinching myself to make sure that this isn’t a dream.”

The best part about this experience was that the feeling didn’t wear off at any point during the game. I had seen the famous Yankee “Roll Call” done by the Bleacher Creatures on TV countless times before, but standing out in centerfield at the Batter’s Eye Deck and being right next to this rowdy bunch to watch it firsthand was special. Seeing the reaction from the fans when each player acknowledged them was great to see. Just of bunch of New Yorkers out at the ballpark enjoying every minute of the Yankee Stadium experience. There really is nothing like it.

What made the night even better is that not only was I there with my MSBA class, who I already feel like I’ve known for years despite it being just one week, but we were surrounded by members of every MSBA class since the program was founded in 2012. Seeing how excited all of them were to reunite with one another had all of MSBA ’18 understanding even more how special this program truly is. David, Lorne, and Bailey have continuously preached that MSBA is not just a program for aspiring sports business professionals to make connections and learn invaluable skills from some of the best in the industry, but that we are now members of the MSBA family. And while I believed every word they’ve said about this family, Friday night was the first time that I got to see it for myself. Speaking with the past members of this prestigious program made me realize how lucky and fortunate I am to be a part of it. Many of them already offered guidance and support to me in my career pursuits and treated us all as members of the family we’ve heard so much about.

Friday night was a night that I’ve been looking forward to since I first saw Derek Jeter play in Yankee pinstripes on TV. And even if I missed out on seeing the old Yankee Stadium in person, the new one lived up to everything that I had ever hoped it would. Every day being in New York, I get to experience new things that I only ever hoped I would experience. As MSBA continues to open up more and more doors for me, I keep pinching myself to make sure that this isn’t a dream. As a proud San Diegan, I will always argue that Petco Park is the best stadium in the MLB, but the aura that Yankee Stadium has simply cannot be matched. I can’t wait to see what comes next this summer and while I know it’ll be something special, I doubt anything will give me the feeling that I got Friday night. I got to be a little kid in Disneyland without a care in the world, just living out a dream.