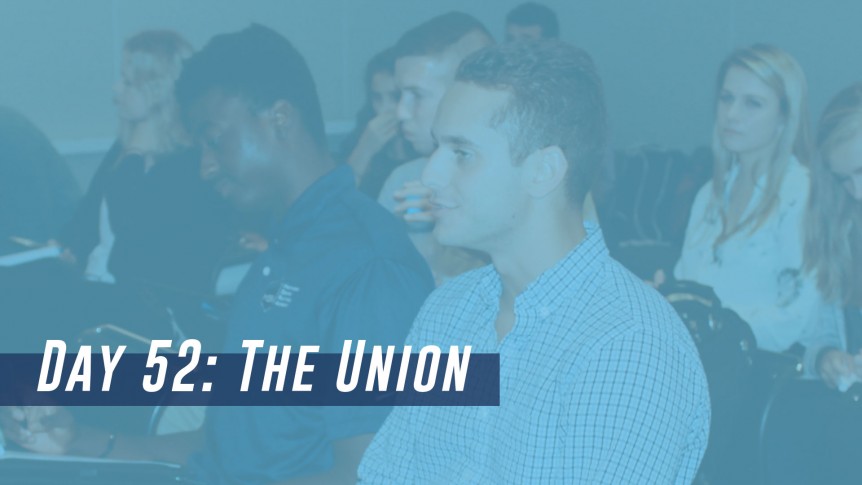 We have made it to the last week! I look back and think about when we moved in together, and it feels like it was just yesterday. We have come such a long way, both individually and collectively, and it’s been amazing to watch my peers grow in this industry. It has been an exhausting journey, but that exhaustion has brought along so many memories and opportunities that will help us succeed. We have created circles of relationships that we can call on for advice about school, career paths, or anything that crosses our minds, because that is the MSBA Way; that’s where this program differentiates itself. We have created a union – not only the Class of 2017, but the MSBA Community as a whole.

Speaking of unions, we visited the National Basketball Players Association in Midtown tonight to tour the facility and sit down with a diverse panel of NBPA representatives including Kirk Berger, Ricki Dean, David Foster, Dan Gladstone, and Justin Jackson. The Players Association represents every active NBA player and gives them a home base in the City with their top-notch facility. Justin Jackson, the Facility Manager, was describing what the building’s operation looks like on a day-to-day basis, with five to ten athletes coming through the doors to handle anything from rehab, community relations, contract negotiations, and educational services, all of which are run through the NBPA. Equipped with private conference rooms, a training facility, and much more, the facility is available to players at any time throughout the year to give them a holistic athlete experience.

Ricki Dean, the NBPA’s Associate Manager of Strategy and Development, talked about how the union helps rookies transition into the league and understand how to be the most successful through resources like financial literacy classes and business development workshops. The funny thing we sometimes forget is that the average NBA career is roughly five years. Even if you were a resilient person and played for 15 seasons, you are probably 33 or 34 years old when you go into retirement. Now look at us normal people – by the age of 33 or 34, we hope to be making a name for ourselves in this industry and looking into the future for what’s to come. We probably have at least 30 more years left in our career before retirement comes across our minds. This contrast is exactly what the NBPA tries to mitigate for the players; they want to provide them with as many tools and as much knowledge possible so they can be the most successful they can be during and after their careers. As Dan Gladstone, the NBPA’s SVP of Grassroots Basketball and Business Development, said, “NBA teams show them where to buy a house, we show them how to buy a house.” Their main goal as a Players Association is to serve the players with anything and everything they need while always keeping their best interests in mind.

“There’s nothing better than that feeling of knowing people have your back in this tight-knit community MSBA has created for us.”

I have thought a lot about this blog post and how I would convey my experiences and what this summer has truly meant. This is a really hard task because there has been so much to write about and, quite frankly, my peers who have written blog posts before me have done such an exceptional job. That said, this is perfect timing because MSBA and the NBPA can be compared. We might not be overseeing millions of dollars in contract negotiations, but we are creating a union for our community that is strong and trustworthy. Not only are we creating this environment for our counterparts in this summer’s class, but MSBA is creating a community that spans across the veterans in this industry all the way through to the next rising stars. Soon, we will all be making our marks in the industry and MSBA will serve as our home base in the same way the NBPA serves as the players’ – there for us when we need assistance, a quick rehabilitation to get us back on the court, or a simple catch-up for dinner to remind us that we are all a team and work for each other’s best interest. There’s nothing better than that feeling of knowing people have your back in this tight-knit community MSBA has created for us.

Some of my peers in the class talk about heading back to school, which leaves a bitter feeling in my body. There is no returning to school for me; it is now time. I’m planting my roots in this concrete jungle, hoping to grow by deepening these roots within the MSBA Community and expanding my reach to even more industry leaders here in New York City. It’s only the beginning of this lifelong journey, but the weight we all carry seems a lot lighter when we have a union behind us to help whenever the roadmap seems a little confusing or when we really want to make a turn. I might be getting a head start, but I know sooner than later the rest of my MSBA peers will be alongside me leading this industry into the future, equipped with skill sets and relationships that will carry us through any obstacles that get in our way.