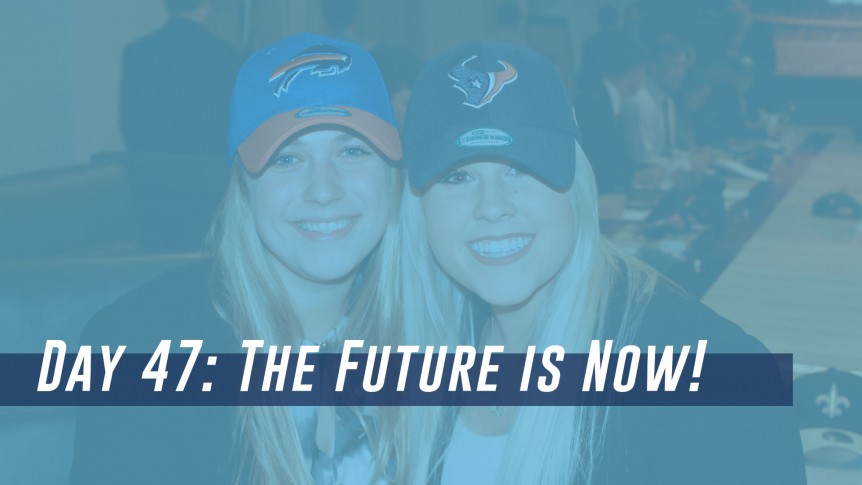 Being a southern girl from Texas where football reigns supreme, I have been a huge football follower my entire life. So, going to the Mecca of professional football is something I have looked forward to since I got the call from Lorne and Bailey informing me I had been accepted into the MSBA Class of 2017.

My hometown of Houston was lucky enough to host this year’s Super Bowl, and what a game to host. Although I wish my Texans were playing, who could forget the New England Patriots’ shocking comeback to top the Atlanta Falcons 34-28? I was lucky enough to be immersed in the action as I worked at the NFL Experience’s Fan Fest. Meeting Roger Goodell was a huge highlight as he walked around thanking the hundreds of volunteers who made it one of the best Super Bowls in history.

Two months later, my professor encouraged me to apply to work the NFL Draft in Philadelphia with C3 Presents, an event production company based in Austin. On a whim, I applied and got hired as one of twelve zone managers. Working the Draft furthered my excitement not only for a career in sports, but for my entire future as well. The Draft coined the slogan “The Future is Now” – meant to inspire the college hopefuls looking to make their professional dreams come true. I made it my new motivation; I vowed to make the most of my summer in New York City and further develop myself to reach my own future dreams and goals.

“As the summer is quickly coming to a close, I will say goodbye to the city that shaped me, my friends who have become family, and a jam-packed summer. Just like the athletes leaving college to go professional at the Draft, it is safe to say that my future is now!”

Fast-forward to July 27th and I have been in New York City for almost eight weeks. I have had the most incredible experiences: Office Field Trips to some of the most high-profile offices in the sports world, meetings with industry professionals willing to share their experiences, and making lifelong friends with my classmates. I have truly cherished every moment of my time in New York, all thanks to Manhattan Sports Business Academy.

As Antonio Brown would say, “Business is Boomin’,” and boy is he right. My internship at Brooklyn Sports & Entertainment (BSE) has been nothing short of boomin’. I primarily work for ENTITLE, a newly-formed naming rights agency within BSE’s Global Partnerships department. My role is unique in that our agency is very small, and as such, I am assigned tasks that are atypical of “intern duties” – a little scary at first, but what a tremendous learning experience. Today was no different at the office – my boss and I had numerous calls to make, meetings to attend, and tasks to get done. However, I could not wait until the clock hit 6:00 because 6:00 meant my classmates and I were going to the National Football League to meet with Peter O’Reilly (Senior Vice President, Events) and Michael Markovich (Vice President, International Media & Business Development).

We took the elevator to the 6th floor of 345 Park Avenue, where the Vince Lombardi Trophy and every Super Bowl ring were on full display. I was left speechless as I admired the extravagant hardware (and as my classmates can attest, leaving me speechless is not an easy task). After snapping some quick pictures, we were led to the conference room and told to grab our hats from the long table in the center of the room. I put on my Houston Texans hat with a huge smile – Bulls on Parade, y’all!

Michael and Peter shared their insight and perspectives on NFL International and NFL Events. Having a sister who lives in London, I was aware of the potential international market the NFL has been trying to tap into. My sister is an avid user of NFL Game Pass and attended one of the NFL International games last year – interestingly, those games seem more like a celebration of the NFL as opposed to two teams competing. My sister marveled over seeing Giants, Seahawks, and even Rams jerseys across the pond. Michael shared that the biggest NFL International markets are London, Mexico, Canada and China. All of these markets have a unique fan base and the NFL is strategically trying to reach each market by driving football popularity and strengthening fan engagement. If they asked my sister, she would confidently say it is working.

Peter shed a unique light on the NFL Events schedule and how it is truly a year-round facet of the business operating in four major phases: The Future, Back to Football, Season, and Post-Season. The NFL is comparable to a “Great American campfire” in its ability to bring people from all walks of life together. NFL Events does a great job of celebrating the fans around such a glorified American sport – working the NFL Fan Fest at this year’s Super Bowl and the NFL Draft, I can attest to its success. The enthusiasm of the fans is infectious. The excitement for NFL events and business development clearly came through as we listened to Peter and Mike and was truly the cherry on top of a great Office Field Trip.

As the summer is quickly coming to a close, I will say goodbye to the city that shaped me, my friends who have become family, and a jam-packed summer. Just like the athletes leaving college to go professional at the Draft, it is safe to say that my future is now!