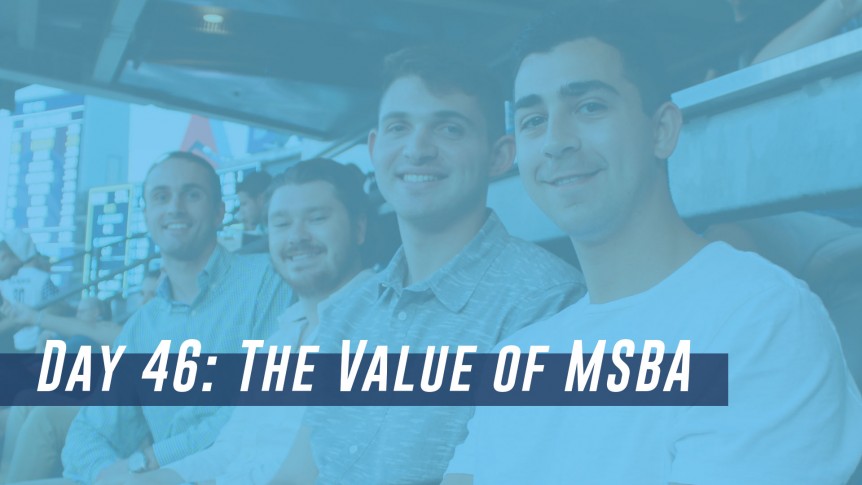 Identifying, preparing, and connecting the next generation of sports business leaders. MSBA’s mission sounds empowering, but it is impossible to comprehend all it entails without being directly thrown into the program with 24 likeminded strangers. Through my own networking, which you will soon find is more than half the battle of landing a job in the industry, I was fortunate enough to be referred to MSBA through Brycen Goldstein, MSBA Class of 2016 and fellow Wolverine. From there, I met both the Program Director and Dean of Students seven months before the program’s start date; looking back now, this was a perfect example of the power of networking. Yet, I realize not everyone with the aspirations of becoming the next General Manager of the Knicks or President of the Dodgers gets the opportunity to learn what MSBA is all about firsthand. So, I want to conduct this self-reflective interview to help you understand the true value of MSBA:

Q: Can you talk about the art of relationship building and how MSBA has grown your network?

It’s crazy to think that I had not met any of my classmates merely two months ago and now I can confidently say I have made lifelong friends. Nothing is more powerful than bonding with your peers who have similar interests as you. Even though we came from all over the world, from Costa Rica to North Dakota to Georgia, we all have so much in common.

In a typical week of MSBA, we go to our individual internships and meet up for programming around 7PM. You can only imagine the daily grind of going to work for eight or nine hours and then being interactive during Office Field Trips, Speaker Series events, and Career Workshops. Yet, when we gather from all over the tri-state area like a herd, I am more concerned with seeing if people read the Speaker bios than asking how their days were. This is a direct result of being a family: skipping the small talk and diving into the “real stuff.” Plus, I usually have a pretty good idea of how everyone’s day went with the help of the MSBA Snapchat Story.

From the perspective of growing my network, my 24 fellow classmates are more than just LinkedIn connections. As one of the younger students in the program, I look forward to watching my peers hit the job market as free agents while I complete my last two years at school. And when the time comes, I’m confident they would vouch for me in the workplace and I look forward to reciprocating that in the future.

Q: What is the most impactful thing you will take away from this summer?

Time and time again, Speakers have said that not only are professionals willing to talk to us, they want to help. It is as simple as sending a thoughtful email to set up a coffee, lunch, or even a phone call. If you prepare yourself for any conversation, you can leave a lasting impression on someone who took the time away from his or her work to interact with you.

This desire to help was clearly demonstrated through the Mentorship Collective. Since each of my Mentors are in different stages of their careers, I could pick their brains about various things for my benefit. Through my experience in my internship at Premier Partnerships and with the guidance of my Mentors, I believe I have paved a path to success for myself. By letting people help me and asking the right questions, I have realized I want to experience sports strategy consulting with an agency and one day leverage that experience into a role with a brand. I hope to help a company meet its goals and objectives through investing in the sports industry.

Q: Looking back, what is your favorite memory from MSBA?

Nothing has been more valuable than visiting offices like the NBA, Bleacher Report, and The Players’ Tribune. Those memories will continue to inspire me to work hard and strive to reach my goals, but the true lifelong memories lie with the students in the program – specifically over Fourth of July weekend.

Although it came after only three weeks of work and programming, none of us had anticipated the grind of MSBA prior to arriving, so the four-day weekend was much needed. We took the time to bond as a group by going out at night, grabbing brunch, and watching fireworks from a rooftop in the city. If you couldn’t tell by now, the people in the program make it what it is. In the span of two short months, we went from strangers to family. THAT is the value MSBA offers.