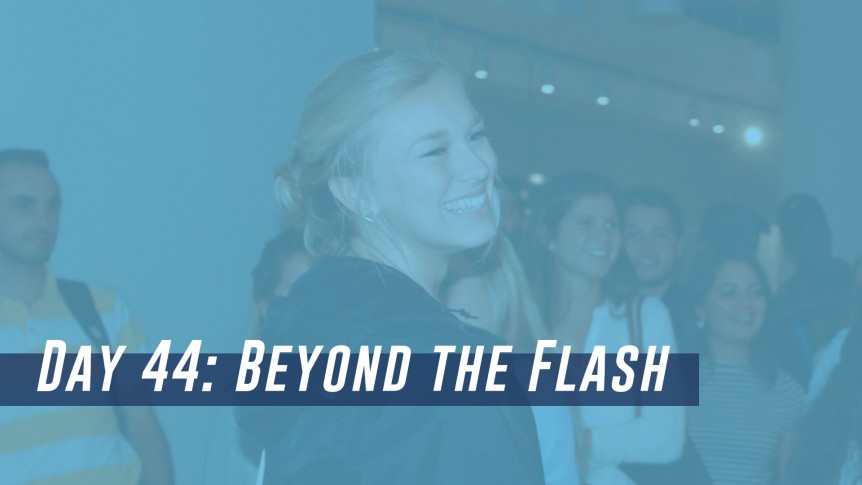 Here’s what’s so cool about The Players’ Tribune: there’s a place for everyone.

Of course, there’s room for the athletes. It’s all about them. You have a story to share? TPT provides the platform. You want to share someone else’s story? That’s welcome, too! Just take a look at C.J. McCollum’s relationship with Adam Silver.

But the thing that I appreciated most during our trip to The Players’ Tribune was its ability to make us “normal people” feel a little less normal while simultaneously normalizing the athletes. One of the first parts of our tour included another athletic display by Dayna on the Pop-a-Shot in an attempt to break Lonzo Ball’s record. The office never felt much like an office – it was more like a place you’d want to hang out. But that’s the point. It’s supposed to be comfortable for these athletes – people who want to share their stories and whose stories everyone wants to hear.

As someone who adores reading and writing, I regularly read The Players’ Tribune. I remember when Mitch Trubisky’s piece circulated around Carolina’s campus as he revealed his decision to go to the NFL Draft, a decision we all expected but hoped wouldn’t be true. Justin Jackson’s article just before the National Championship had the same effect. We all felt like we knew these guys, as most fans do, but the truth is, we didn’t. Each Carolina student has his or her own experience, and these guys were no different. When you’re reading their pieces on The Players’ Tribune, you don’t feel like you’re reading a long article, you feel like you’re listening to a friend tell a story.

“I’ve always known that I want to work in sports and engage with athletes. Hopefully I will eventually be someone trusted enough to share their stories, and maybe one day I’ll be cool enough to share mine.”

It’s not pure luck that got tonight’s Speakers to where they are and put TPT on the map – they had to stay humble, level-headed, and passionate about the grind. The sports industry is flashy. I learned that firsthand two weeks ago when I worked the Mayweather vs. McGregor World Tour stop at Barclays Center (talk about an extravagant display). I was backstage and got some great videos for my Snapchat story of McGregor and Mayweather walking about two feet away from me. I had a lot of friends Snapchat DM me saying how jealous they were. That kind of stuff can make you feel cooler than you actually are, and – as Brett has made quite clear to me – I’m not very cool.

But the trip to The Players’ Tribune made me take a step back and realize how it must feel to live like those fighters, constantly having the flash of cameras in your face and everyone wanting a piece of content. These athletes have stories to share, but those aren’t necessarily the attention-grabbing headlines that drive impressions. It’s great to see a group of people who genuinely care about sharing their stories and providing multiple platforms to do so.

That’s something about which I’m passionate – everyone deserves the opportunity to share. Listening invites empathy, and I think everyone benefits from a dose of that. I’ve always known that I want to work in sports and engage with athletes. Hopefully I will eventually be someone trusted enough to share their stories, and maybe one day I’ll be cool enough to share mine.