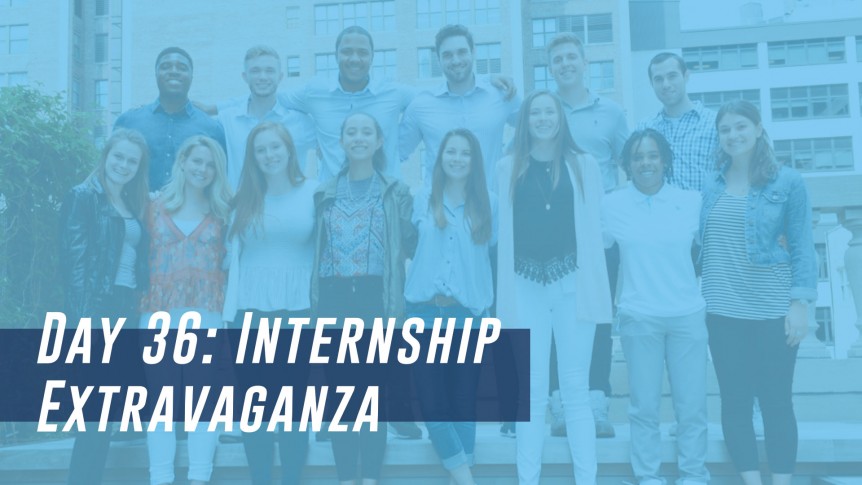 In my first blog post, I covered the work I’m doing at my internship and how enfranchised I feel to be working in an office culture like Foot Locker’s. However, in the last three weeks I have been able to do things very few people have done and have had memorable experiences with my interning peers; while these experiences also speak to the culture of Foot Locker, they do so in a much more impactful way. Three weeks ago, the other interns and I had lunch with Jake Jacobs, the CEO of Foot Locker North America. He opened the floor and gave us an hour of his time to answer any and all questions we had, including personal questions, career questions, and experiential questions.

A week later, we went to the Common Pantry in East Harlem to do some volunteer work. What would normally be a Friday spent sitting in the office was a Friday spent getting our hands dirty for a good cause. We packaged a bunch of different foods and prepared orders for people to pick up. The Common Pantry runs 100% on volunteers, which saves them $1.5 million a year to put back into their operations and help them end hunger, and I am so glad to have been a part of it. It was a great experience that was not only intrinsically rewarding, but allowed me to get to know my peers better in a loose, non-office environment as well. Having interns do community service speaks to Foot Locker’s values and echoes the fact that they expect their interns and employees to share the same.

“Overall, it was an amazing and fun time that allowed me to get to know my co-workers in a non-office environment, and I couldn’t be more thankful for how this internship has panned out so far. I am looking forward to what the next four weeks have in store!”

All of this being said, last week was a week I will never forget. If you thought having lunch with the CEO of North America was big (which it is, don’t get me wrong!), last week we had lunch in the Executive Boardroom with the CEO of Foot Locker, Inc., Dick Johnson (aka the big kahuna). Humble and down to earth doesn’t even begin to describe this man. Sitting among us, whereas other execs in the past have always sat or stood at the front of the room, he immediately made us feel comfortable by showing us that, while he is older, wiser, and in a position of power earned from years of experience and hard work, he doesn’t view himself as any better than us because he too was once a young intern. He told us a story about a time he visited a Foot Locker store up in Toronto and met two boys who were in town with their parents to see the Texas Rangers play the Toronto Blue Jays. Wearing a blazer and standing out with a small entourage of cameras, they knew Dick was someone important and followed him around the store from brand section to brand section intrigued by who he could be; he eventually caught on and turned to them to introduce himself. He had a personable conversation with them and then gave their parents the 30% employee discount. He received a letter shortly thereafter from the parents of the two boys saying that their sons’ favorite part of the trip was not going to the baseball game with their parents, but rather meeting the CEO of Foot Locker. He told us that was his most rewarding experience as the CEO of this company, and I left that lunch with an incredible lasting impression of not only Dick, but Foot Locker as a whole for being run by such a remarkable man.

The next day, Foot Locker had its company picnic at the Forrest Lodge in Warren, NJ. My supervisor, Steve Spiegel, and I took part in a water balloon toss competition and came in second place among 20+ teams. We had some close calls, but Steve wasn’t afraid to get dirty in the mud to make some dire catches. We then played in the First Annual Real Estate Softball Picnic One Game Elimination Invitational Tournament Extravaganza, a name just as stupid and funny as it is long, which just speaks to the fun culture in our department. My team got crushed 8-0, but at least I batted 2-2 so I can now say I have a career batting average of 1.000. Overall, it was an amazing and fun time that allowed me to get to know my co-workers in a non-office environment, and I couldn’t be more thankful for how this internship has panned out so far. I am looking forward to what the next four weeks have in store!