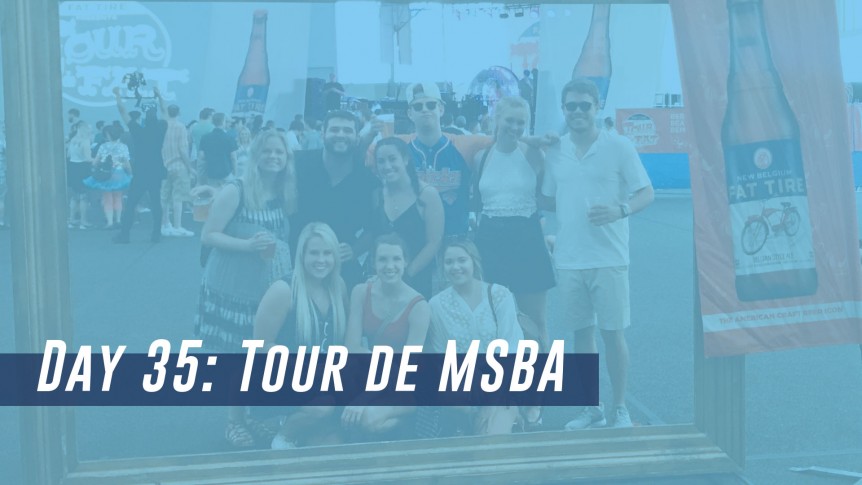 Has it been five weeks already? The obvious old cliché that comes to mind is “time flies when you are having fun.” My God have I been having fun. It is foreign to me that a month-and-a-half ago I didn’t know any of the now very close friends I have made through MSBA.

Which is what makes a day like yesterday so special. Yesterday was a day with zero MSBA programming, something that thankfully happens as often as the summer solstice. And yet, it was a day spent among friends in the program. Me and nine fellow MSBAers journeyed (via multiple trains) to Pier 36 to attend the Fat Tire “Tour de Fat” – an event we were invited to by one of my classmate’s Mentors, Julia Cheney of CAA Sports – and see The Naked and Famous perform.

The Naked and Famous was amazing to hear live; however, what was even more special were the three hours before they came on stage. The event featured tailgate games like cornhole, team Jenga, and KanJam and numerous other ways to keep busy; we turned off our collective brains to play “Heads Up,” indulge in sponsored beer, try five different types of popcorn, and – most importantly – enjoy each other’s company (in addition to some Mentors who were also in attendance).

“I’m sure in 20-or-so days, when I look back on my summer, it will be these moments alongside new and close friends that will endure along with all the Speakers, Mentors, and experiences I have encountered through MSBA.”

When The Naked and Famous finished, we traveled back to MSBA Housing and ventured for some late-night sushi. There, we were greeted by a crazy waiter with an even crazier laugh and indulged in numerous rounds of “Mount Rushmore” – a game that reveals what people prefer when it comes to various topics like Asian cuisine, Olympic events, and comedy movie actors. We played for another two hours until everyone was too full to speak.

The day was a perfect embodiment of what The MSBA Way looks like midway through the summer: students who didn’t know each other five weeks ago – and who spend a majority of their time learning and living side-by-side – choosing to spend a day off together.

I’m sure in 20-or-so days, when I look back on my summer, it will be these moments alongside new and close friends that will endure along with all the Speakers, Mentors, and experiences I have encountered through MSBA. These are experiences I plan to take with me well after the program is through, since this whole thing is a marathon and not a sprint. For now though, I’ll choose to enjoy the rest of this ride on the Tour de MSBA.