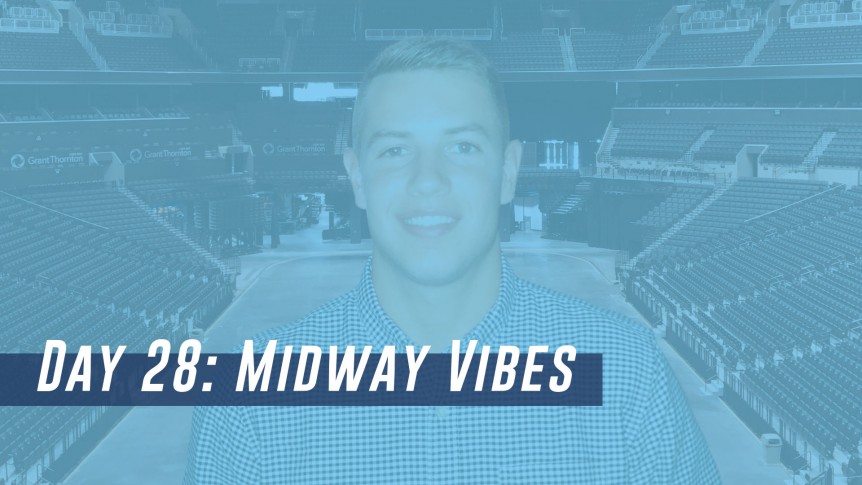 The Mid-Summer Gathering yesterday really made me reflect on the first four weeks of MSBA 2017. What a ride it has been. Working at my internship with Overtime, representing Overtime at AAU games throughout NYC, attending nightly programming, and hanging out with my fellow classmates has taught me to value my down time. One of my classmates’ Mentors, Jakob Gutierrez of Wasserman, who was at the Mid-Summer Gathering added to this by saying, “value your down time, but don’t waste it.” He told me to utilize that time to put in the work to distinguish myself among others, which will in-turn make MSBA that much more valuable. Having not only my own Mentorship Collective, but also many others who are more than willing to help, is what makes this program and industry so special. These next four weeks will be a grind but I’m looking forward to it.

“This has been the vibe of MSBA since move-in day, and it only gets better as our passion for sports and the feeling that we belong in this industry is solidified by everything we do.”

Now at the midway point of MSBA, I’ve not only learned more than I thought possible but I’ve also eaten at many food spots throughout New York; I can’t count how many “best ever” meals I’ve had. It’s a goal of mine to go to as many famous restaurants as possible no matter how far I have to travel. I did a little Googling and decided to go to Los Tacos No. 1 in Chelsea Market and man, it did not disappoint. Among this taco stand there were many other spots with long lines in the market so I will definitely be going back.

As part of my internship with Overtime, I must attend at least 2 AAU games to record and post content to the app, so I decided to sign up for today. After eating a delicious meal, I hopped on the subway over to Tilary Park in Brooklyn for a couple of games. While most people would prefer not to work on Saturday, I gladly signed up – I don’t consider it “work” when I enjoy what I’m doing (and watching my favorite sport is also a plus). This has been the vibe of MSBA since move-in day, and it only gets better as our passion for sports and the feeling that we belong in this industry is solidified by everything we do.