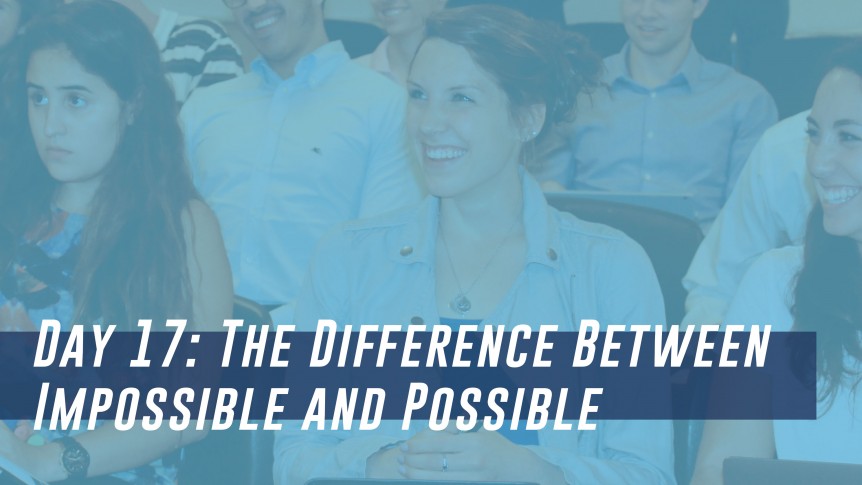 As much as I’d like to think so, I’m not all that special … despite what my mom and dad tell me. In case I, or any of my fellow MSBAers, were beginning to lose sight of that ever-so-important humility, Alex Rosen, Counsel for the MLB, so bluntly reminded us of that fact during our first week of programming. Nothin’ like a little blow to the ego to kick off a summer in the dog-eat-dog world of sports, huh?

All kidding aside, Alex’s statement is nothing but true and his authenticity greatly appreciated. Why? Because in reality, like me, a lot of people have drive and a lot of people have talent; the thing is, not everybody knows what to do with it. Trying to figure out how to combine your passions, interests, skillsets and talents into one successful and fulfilling career is a daunting task, which is why so many of those talented and driven individuals fall short and end up at dead end, nine-to-five jobs dreaming about the life they never made for themselves. Well guess what … I refuse to be one of those people. I may not be particularly special compared to many others in this world, but what I am not willing to do is settle on the goals and dreams that I have for myself.

“In my mind, the difference between impossible and possible is the people who surround you, and given the MSBA family I am constantly surrounded by, impossible isn’t even in my vocabulary anymore.”

That is where MSBA comes in … to help me, and 24 others, connect the dots. In less than three weeks, MSBA has already put me in a position to make the most of every ounce of determination I have to make it in this crazy world we call sports. Whether it’s putting me in front of the best of the best in the business to hear about what it takes, connecting me with like-minded Mentors who inspire me into action, allowing me access into some of the most iconic venues in the industry, or, like tonight, walking me through invaluable Career Workshops, being part of MSBA is what makes me special. Even something as seemingly rudimentary and unglamorous as the “Resume Boot Camp” Lorne and Bailey walked us through tonight became an eye-opening experience on how to market and differentiate myself right off of the bat. This program has a way of making anything and everything more than it seems, and I can already tell that MSBA is what will take me from being just another talented and driven candidate to being someone special. Someone who truly has something to offer this world. Someone who lives out their dream.

The best part about it? I get to do so alongside 24 now lifelong friends who were complete strangers to me just three weeks ago. I get to watch 24 other talented and driven peers become something special, and even have the opportunity to be part of that process. I get to be part of their success story. Nothing can compare to what that feels like … waking up everyday and remembering that I am part of such an incredible and inspiring group of people. And you know what? Maybe we don’t need to be special in and of ourselves. In my mind, the difference between impossible and possible is the people who surround you, and given the MSBA family I am constantly surrounded by, impossible isn’t even in my vocabulary anymore.