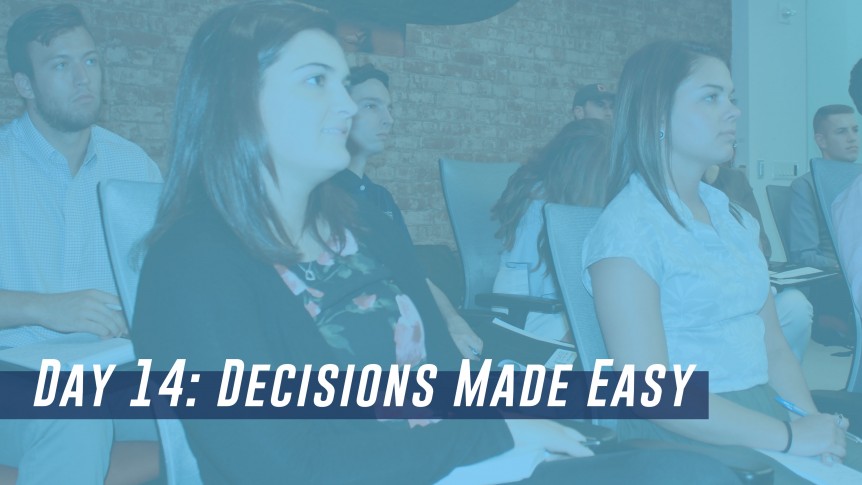 I share these figures with you because I think numbers tell stories (hence my finance major), and these numbers show that I can be extremely indecisive when it comes to making big life decisions.

However, this past February, when I got the phone call from Lorne and Bailey informing me I had been accepted into MSBA, I automatically said “yes!” It was one of the fastest decisions I have ever made, although a few minutes later – being the responsible young adult I am – I did tell them I should probably confirm with my parents that they were ok with me moving 3,000 miles across the country to spend two months in New York City. Two days later, I had the green light from everyone and was headed to NYC for the summer.

“I feel more motivated and inspired than I ever have before. MSBA has proven that they are able to get you in the door, and from there it is up to you to make the most it – a challenge I am more than ready to take on over the next six weeks.”

Now fast forward to a week ago: the start of the second week of MSBA. It is Sunday afternoon and I am arriving at MSBA Housing for the first time. I go to Santa Clara University, which is on the quarter system, meaning that I was in California taking finals when my MSBA classmates were all moving in, starting their internships, and getting to know each other. As I checked in at the front desk I became incredibly nervous. What had I gotten myself into? I had read every single blog post from the last few years on the MSBA website, all describing how amazing this program is, yet now I was wondering how true they really were. Was it actually possible for so many people to think so highly of this program? The answer, again, is “yes!”

The past week has been nothing short of an absolute whirlwind; I have never had so many incredible experiences in such a small amount of time. If MSBA ended today, after only having been here for one week, I would still tell people it is absolutely worth it.

My classmates all come from very different backgrounds, yet we share the common bond of our love for sports. I discovered this when Mark French, who serves on the Board of Advisors for The Players’ Tribune, asked us which Tribune pieces we enjoyed most. On the way back to our rooms, fellow classmates and I continued this discussion. This is when it hit me that everyone here is just as big of a sports nerd as I am. The comradery between the class does not stop there; as I was unpacking Sunday night, there was a constant stream of knocks on our door. Everyone was stopping by each other’s rooms to hangout and make dinner plans – some even came by just to meet the new girl. I met half the class in less than an hour, and could tell immediately that, although this group had already become very tight-knit, they were more than willing to welcome me in. The doubt I felt just a few hours before quickly melted away.

By Friday, I was sitting at a conference table inside NBA Headquarters on 5th Avenue, surrounded by my classmates and thinking I should not be here. Not because I made the wrong decision in February, but because that is what MSBA does. It literally makes you say “I should not be here” to yourself at least once a day because of all the amazing opportunities it provides. Between my internship as the Finance & Accounting Intern to the CFO of Krossover, MSBA Office Field Trips, Speaker Series events, and outings with my classmates, no day has been dull.

As I was on the phone with my mom filling her in on my first week, she asked if I was tired because I had been nonstop busy. When I paused and thought about it, I realized I am the opposite of tired. I feel more motivated and inspired than I ever have before. MSBA has proven that they are able to get you in the door, and from there it is up to you to make the most it – a challenge I am more than ready to take on over the next six weeks.

After one week, I can honestly say that I have zero doubts I made the right decision by participating in MSBA. For a girl who applied to eighteen colleges, that is as much assurance as you are ever going to get.