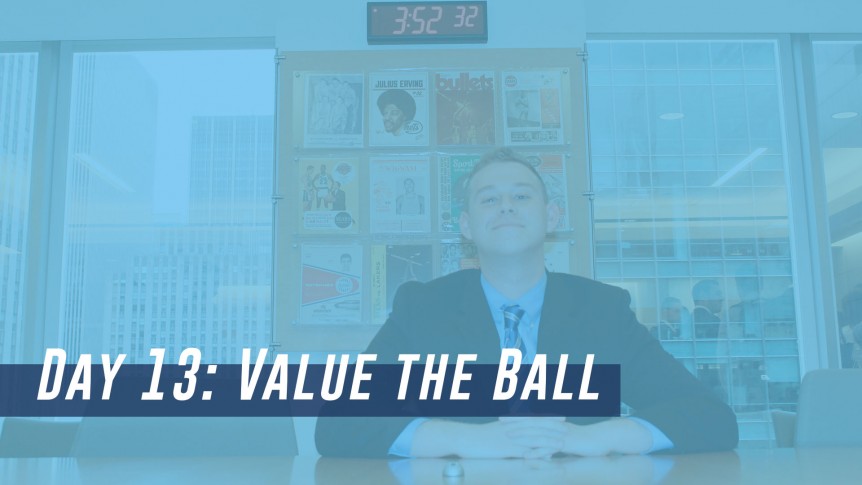 “You Can’t Get Much Done In This Life If You Only Work On The Days You Feel Good.” – The Logo

The above is a quote from Jerry West, the Hall of Fame Lakers player who has doubled as one of the greatest minds in NBA history and tripled as the silhouette of a man dribbling plastered on nearly every piece of NBA gear on this Earth.

It’s the day after the 2017 NBA Draft, and a small sense of panic fills my entire body as I awaken. I scramble over to my phone to check if my favorite Knick since I was born, a 7’3” three point shooting, rim protecting, put-back dunking future All-Star had been traded as I slept. No news – no “WojBomb” just yet. Still, a sense of uneasiness after the flurry of moves at last night’s Draft still lingered in my gut as I prepared myself for a special day.

The Jerry West quote seemed fitting with this uneasiness, as my classmates and I were set to meet with one of the pioneers in sponsorships and marketing known as “TMBO” (Team Marketing & Business Operations) at the NBA Head Offices. After arriving fully suited at the building, I felt like a kid in a candy store; this was my first peek behind the curtain of a league I have been crazy about for far longer than I can remember being passionate about anything else. We were brought up to an office littered with NBA collectibles and memorabilia that looked like it belonged in a Hall of Fame wing. As we sat down in the conference room, I can only imagine the look of excitement my classmates saw on my face – the same excitement I saw on theirs as the TMBO professionals began to take their seats.

I want to express how incredible it was to hear TMBO both describe their own methodology and answer questions my classmates and I had. The presentation took us through some highlights of the NBA that make their department proud: record attendance, the number of seven figure partnerships, percent of arena capacity filled, and the number of league-wide sellouts. Four core principles were expressed and explained in-depth to a room full of students who could have sat there and learned for days. Discussions that included “reaching the anonymous fan” and “how to price tickets to attain best yield” finished off the presenting portion of the session before we, the students, had the chance to dive into our own curiosities.

The question and answer portion of our meeting with TMBO was incredibly informative and fascinating from an NBA fan’s perspective. With that, nothing stood out to me more than a quote from Mr. Anthony Ronca, Coordinator of TMBO, when he answered a question regarding how NBA teams best succeed in the areas his department focuses on. He said, “Have a deep bench. Find the right people – different people who won’t let you stagnate.” As I looked around the room at my 24 classmates, I smiled knowing this was one of those days where I was getting something done in life.

“My Dream Was Bigger Than Anything Else.” – The Answer

The above is a quote from Allen Iverson, the Hall of Fame 76ers player who is widely recognized as one of the most influential NBA players of all time and doubles as the reason I fell in love with the game of basketball.

It isn’t rare to have a dream job at five years old – mine was to play point guard in the NBA. June of 2001 was a time when me and millions of others were dreaming of pullback through the legs, dagger step-back jumpers, with a little bit of that step-over swag that came with the time. I essentially tried the professional basketball thing for a few years, before mercifully being told by my parents at about nine or ten years old that the NBA wasn’t going to happen, and that school was going to be even more important in my life. Five-year-old Brett Kornfeld would have told you just how great of an NBA PG he was going to be.

It isn’t rare to have a dream job at 13 years old – mine was to be an NBA GM. June of 2009 was a time when NBA 2K and NBA Live were all the rage. What was more? Interactive franchise mode, where building an amazing team was equally as competitive as who was better at playing. I had already become a sort of extreme basketball junkie for a kid my age, and in these formative years I realized just how crazy I was about assembling a roster. Furthermore, I was slowly starting to realize just how much I loved the NBA as a whole. I was enthralled by the assembling of Boston’s “Big Three,” the Lakers’ trade for Pau Gasol, and the upcoming free agent class of 2010. 13-year-old Brett Kornfeld would have told you he was going to assemble the greatest basketball roster ever.

It is rare to have the same dream job at 21 years old that you had when you were 13. Michael Jordan once said, “I can accept failure, everyone fails at something. But I can’t accept not trying.” It is June of 2017, and I am even more passionate about my (now somewhat expanded) goal of working in basketball operations for an NBA franchise. This summer of experience and first-hand learning in the sports world is me trying. It is a commitment that I plan to play all four quarters of my journey to this dream, a dream that is bigger than anything else. 21-year-old Brett Kornfeld will tell you he can’t wait to chase it.

The above is a quote from Kevin Durant, the future Hall of Fame forward who (for my money) is the single most gifted offensive basketball player of all time and doubles as the man who helped turn the NBA upside down with his move to the Golden State Warriors last July.

Kevin Durant’s “My Next Chapter” is the title of the piece he wrote for The Players’ Tribune to announce said move. He explained the list of reasons he had for moving on to a new situation in Golden State, his reasons for trying something different, how thankful he was for his past experience in Oklahoma City, and how ready he was to seek a higher level of his passion. My next chapter is this summer – a summer that entails an internship with Brooklyn Sports & Entertainment and membership in the MSBA Class of 2017.

My first three working summers were all spent as a counselor at Timber Lake Camp, a place that I adore and love having been a camper there myself; it was a place I felt comfortable. Last summer, I was gifted the opportunity to have an incredible internship with the WWE as an International Business Intern. The headquarters are located in Stamford, CT, which allowed me to live at home and see my friends every day; it was a place I felt comfortable.

This summer is quite different. I have never lived in NYC, never navigated the subway system on my own, and never dressed in a suit-and-tie every day for work; it has been a place I am getting comfortable with.

It’s ironic to try and compare situations with Kevin Durant, since (quite objectively) the reality of them differs so severely. But it’s not about the reality – it’s about the mindset. MSBA represents the higher level of my passion; it presents an opportunity to hear from a new Speaker almost every night (including Mark French, who is on the board of The Players’ Tribune, for which Kevin wrote his piece), make incredible contacts, learn with Mentors, and get the chance to meet professionals on Office Field Trips. Most importantly though, Kevin’s decision was analyzed (rightfully so) by those around him as a move to seek new teammates who would make it easier to excel and who valued the same things he did. My new teammates are my MSBA classmates; if nothing else, I have been so fortunate to have stumbled into a group of 24 other incredible students who value what I value, dream how I dream, and are seeking their own next chapter.

The above is a quote from my dad, the Hall of Fame parent who pounded this concept into my head as a child when I was learning how to play basketball’s toughest position at a young age. The quote doubled as a running joke in my family for my mom and brother, Dylan – they heard it so often they couldn’t help but say it themselves.

When Kevin Durant referred to his mom as “The Real MVP” during his 2014 MVP speech, it became the perfect encapsulation of people who don’t get the credit for helping someone achieve their dream. I am beyond lucky to have been blessed with many people in my life who fit this description. My parents and my brother have supported and pushed this dream of mine for as long as I’ve had it. Complimenting them is the most incredible group of friends who encourage that my passion be pursued. These are the real MVPs of my life.

“Value the ball” was always meant to remind me about the importance of not committing turnovers. There are only so many possessions in a game of basketball, and thus each one carries a certain level of importance in achieving the end goal of scoring the most points. We could only win if I didn’t squander the opportunity to have the ball in the first place.

No quote embodies this summer better. In my hands lies all the opportunity in the world to score for my future. A bottomless array of experiences, laughs, and challenges await in the next six weeks. Who better to meet the challenge with than my new group of All-Star teammates?

This is the team with the deepest bench. These are people who value the ball; who shoot their shot; who take the contact and finish. Score two for MSBA, count the bucket.