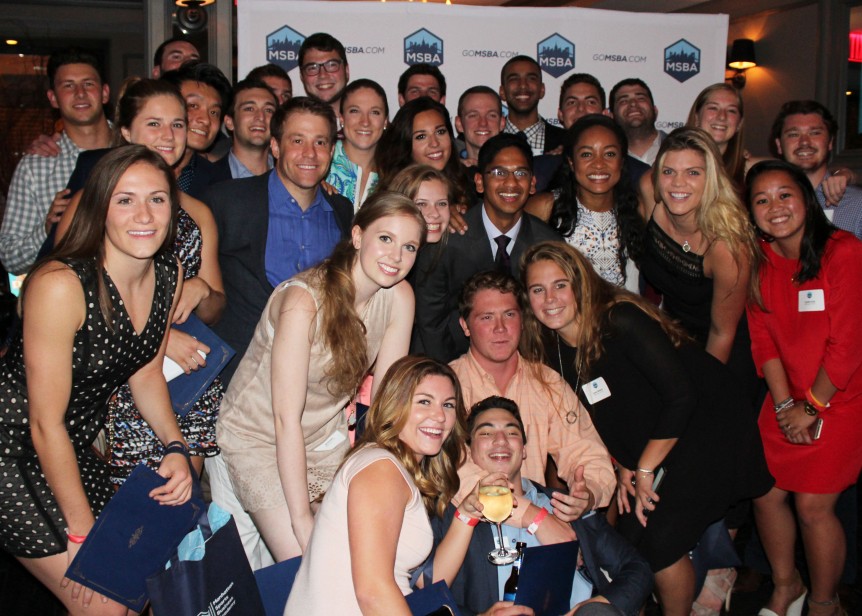 What do you call more than 150 of the sports industry’s best and brightest piled into one room?

That would be the MSBA 2016 Commencement Celebration, of course.

Thursday night was one for the ages. It was a chance to not only reflect on our experiences and accomplishments of the summer, but to soak in what MSBA has really meant for each of us in the Class of 2016: a chance at achieving our dreams. MSBA is our golden ticket. It’s our “secret sauce”. It’s our catalyst moving forward in an industry that is so difficult to stand out in. However, knowing the right people makes the challenge of breaking through a little easier. Now, as graduates of a program designed to identify, prepare, and connect the next generation of sports business leaders, we can place ourselves in the same context as all those we have met this summer and aspire to be like. There is no question that we still have a long way to go, but we should now have all the confidence in the world in our ability to be the next Ben Sturner, David Oestreicher, Jason Belzer, or Jared Schoenfeld. If we’re lucky, we might even get to Lorne Segall’s level, but his shoes (and shirts) are big ones to fill.

It feels like just yesterday that my classmates and I were heading off to the first day of our internships, wide-eyed and a little nervous. I still can’t wrap my head around the fact that pretty soon I’ll be saying goodbye to most of them. Yet, even though this summer has come and gone in the blink of an eye, this is not the end of our journeys on the road that is sports business. Bailey said it best when she described the feelings and emotions of last year’s commencement as “the end of the beginning, not the beginning of the end.” The Class of 2016, once filled with 25 college-aged aspiring sports business professionals at the beginning of the summer, is now filled with 25 future VP’s, GM’s, agents, and athletic administrators at summer’s end.

But not to be forgotten, this industry isn’t for the faint of heart. I’d be lying if I said I didn’t have the occasional doubt this summer, asking myself if this industry was the right one for me. What always got me through that indecisiveness was a quote said by Nelson Mandela. It reads:

You can’t make that kind of impact on society by being a car salesman. You can’t change the world by working at a bank or selling insurance. Maybe one of those is your own journey, and that’s fine. But if you really want to make a difference, and if you really want to jumpstart your career in sports business, be a part of this program. MSBA is the definition of the power of sport, and I can assure you Nelson Mandela would be proud.

As I conclude with my final thoughts of the summer, I just want to say thank you to everyone who made this an experience that I will never forget. To the MSBA Staff, my Mentorship Collective, and my classmates, words don’t do the impact you’ve had on me enough justice. It was a privilege to be surrounded by so many like-minded people who share the same dreams as I do.

Thanks for the memories.