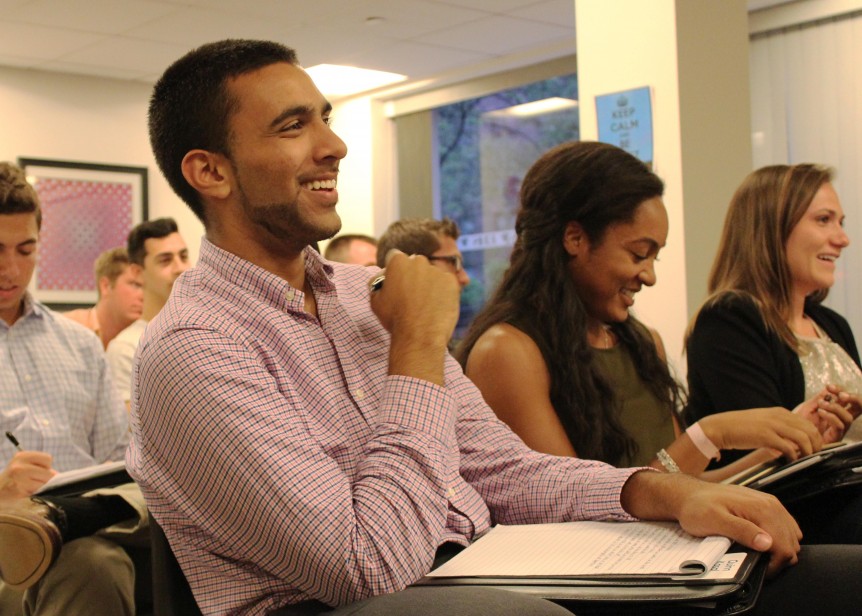 It is hard to believe MSBA 2016 is coming to a close. I’m hyped for Commencement, but I’m also certain that as soon as it’s over and we’re really done with MSBA, I’ll miss so many things about the daily routine I take for granted now. Things like arriving at the nightly MSBA event and goofing around with my classmates before the event starts. We may always have each other as contacts and friends, but the group camaraderie we have here is irreplaceable. Something as simple as our introductions, which we’ve been doing every day for eight weeks, become laugh-out-loud hilarious. There’s no way I won’t miss that.

“Much is said about how MSBA will be helpful well beyond our actual days in the program, and that’s absolutely true. Experience, connections, industry knowledge, you name it.”

On a more serious note, however, I’ll also miss the element of MSBA that sees us learning every night. A few years ago, I was talking to a friend of mine who had just graduated from business school. I said something along the lines of “You must feel relieved to be finished studying while working full-time.” He replied by saying that learning insights about the industry you love is a fascinating experience, and that he wished he were still in class because you just don’t get that nearly as much in the “real” world. Even if not everything he learned pertained to what he saw himself doing in his own career, that exposure is not only beneficial but just incredibly interesting to hear about. That’s the way I know I’ll feel about MSBA.

I’ll give you an example. Tonight we got a tremendous look into athlete representation with Joe Branch, Managing Director of Basketball at Roc Nation Sports. Roc Nation is, of course, Jay-Z’s company, so you expect a certain swagger about it. Joe went above and beyond my expectations. Here’s a guy that works directly with names like Kevin Durant, Wilson Chandler, Willie Cauley-Stein, Justise Winslow and Caris LeVert in promoting every facet of their careers. Joe also travels worldwide to scout the next great players to get a feel for their game, personal life, career aspirations, and the work ethic they’ll use to reach them. It was fascinating, but that doesn’t necessarily mean it changed my own aspirations.

When I say I’m a Sport Admin major, countless friends and family jump to the question “Oh, so you want to be an agent?” I know my classmates and sports business students everywhere can relate to that situation. My answer until now has been “Not really.” What’s my answer now? Still “not really,” but it doesn’t matter. I got to hear about the athlete representation side of sports from a true pro – the top basketball guy at Roc Nation. This is that “exposure” element MSBA is always talking about. It sounded cool in theory but now I really get it, and I’ll always have the program to thank for it.

Much is said about how MSBA will be helpful well beyond our actual days in the program, and that’s absolutely true. Experience, connections, industry knowledge, you name it. But daily exposure and group camaraderie? The days of enjoying those are numbered. I’m trying to soak in every last second.