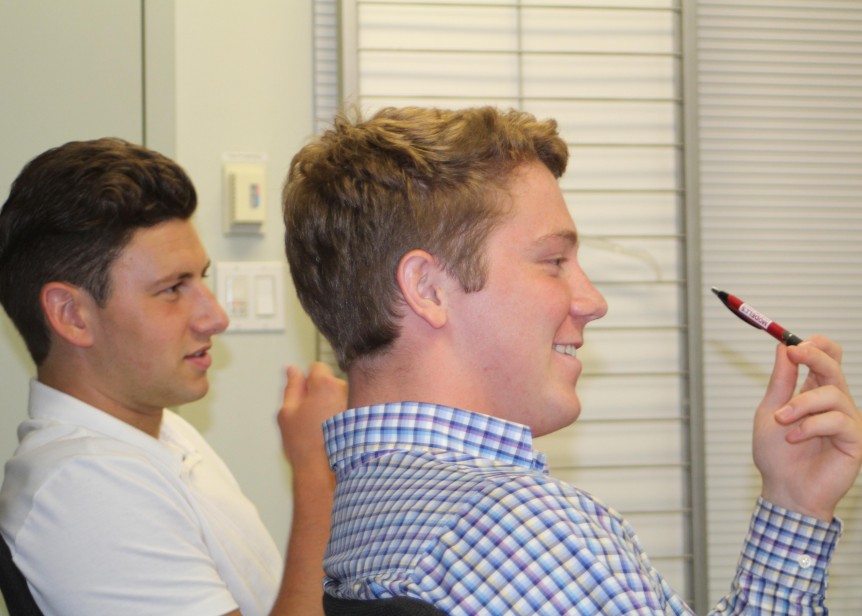 Today we visited Modell’s Sporting Goods Headquarters and had the incredible fortune of speaking with the company’s CEO, Mitch Modell. Despite the fact that we were emailed the address and instructions for how to get to Modell’s corporate office, a couple of us had some trouble finding it. Already running late and relatively unclear as to where we were going, someone had the seemingly bright idea as to just ask Siri … “Oh that’s only seven minutes away we are fine.” After hustling a little bit we arrived in five, only to be walking into a Modell’s store through a group of Pokémon GO fans clogging doorway. The genius marketing ploy that Modell’s created – 15% off for Level 5 Pokémon GO trainers – ended up being a major inconvenience to us. After fighting through the fanatics we found a manager and asked to be brought upstairs to the corporate offices, stating that we were with MSBA. At that point we were met with confused looks and fingers pointing in different directions; eventually we figured out that corporate headquarters was three blocks down and we began our sprint.

“Mitch Modell somehow found a way to seemingly go over every aspect of the sports retail industry. The piece that stood out to me the most was the notion of staying true to who you are as a company.”

After an unnecessarily long journey, we walked into the middle of Mitch Modell’s presentation about twenty minutes late. After finding our seats, I immediately got put on the hot seat. Mr. Modell told the group that he loves Thuzio, the company where I’m interning, and the pivot they have made in their business plan; with that, he asked me to explain all the pillars of the company and how we have changed. Instead of crumbling under the pressure, I took this as an opportunity to sell my personal brand. While it was all somewhat impromptu, I have learned enough at work this summer to sell through my company as a whole. If you are always prepared then you are always ready. Ultimately I felt I did a great job of explaining who we are at Thuzio and what we offer, which then transitioned smoothly into Mr. Modell’s presentation point on talent procurement. The time we spent at Modell’s was great and incredibly insightful.

Mitch Modell somehow found a way to seemingly go over every aspect of the sports retail industry. The piece that stood out to me the most was the notion of staying true to who you are as a company. He mentioned that they avoided over-expanding because that would take away from their image as a family owned, community brand. Staying true to the company’s core values is increasingly important to Modell’s, especially as they recently had a competitor go bankrupt for doing the opposite. While it may have been difficult for me to get to Modell’s offices, it was definitely well worth the trip. Modell’s was one of the most insightful and valuable Office Field Trips MSBA 2016 has made this year.