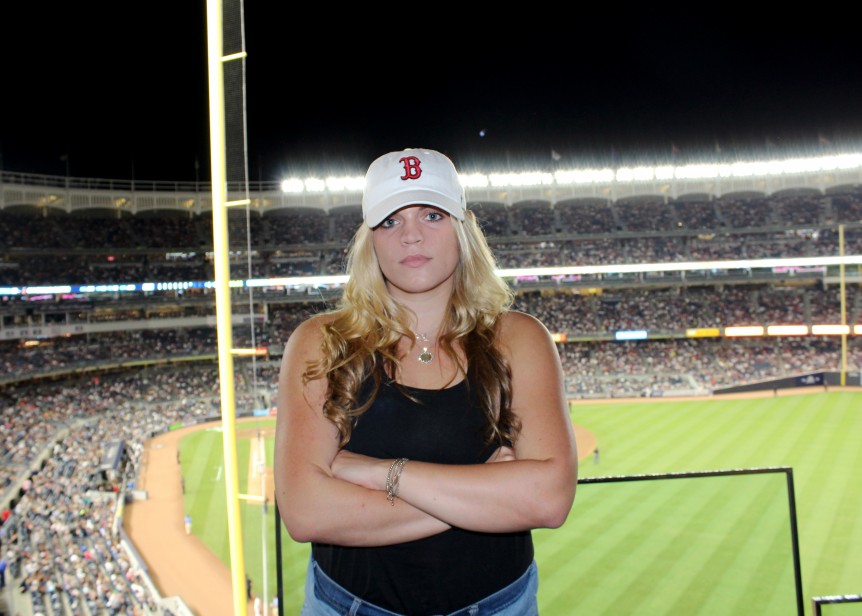 I narrowly miss the aggressively closing doors of the subway and am forced to wait for the next train. Realizing it would be another five more minutes reminded my calves to throb, begging me to take off the heels that bring me back to the days of playing dress up.  When I was five I couldn’t wait until I was grown enough to wear heels: a symbol of power and importance.  Now that they are expected, I still feel like a child playing house, as if I woke up in a role I somehow stumbled into accidently (pun intended because walking is a constant struggle). The underground natural sauna of the subway tests how many beads of sweat can collect on my neck until they eventually lose grip and turn my light pink top into a darker rose shade.  While I contemplate if hell would actually be less hot, I watch the approaching bullet speed in.  Faces after faces after faces of people just like me, different than me, younger than me, older than me, and opposite of me all appear on the tracks; some walk similar paths, some walk vastly different paths than my own, and the majority of them will never cross mine.

“As I step onto the train headed to my next adventure, I feel more ready to get after it than ever before.  I feel energized to go after greatness in the sports business industry, and lay down my own unique tracks.”

While I wouldn’t label myself as worldly in the slightest, I have had decent exposure to some major cities in the US. I grew up in Boston, spent two years in Los Angeles, and have even had a taste of, although a smaller population, a major Mid-Atlantic staple: Charlottesville.  However, besides a few weekend getaways for a Broadway show with my family, I have never stayed in the Big Apple for an extended period of time.  And what I have come to discover through my seven weeks here, unlike any other city, is an apparent dichotomy that I consistently grapple with.

So where does the dichotomy come in?  Why should I feel any ounce of importance when there are millions of lives around me trying to get by, just as I am?  This inescapable feeling of insignificance is continually met with an unending amount of potential.

For every second of overwhelming unimportance I receive from this city, it is combated with a sense of the energetic power of possibility.  The possibilities of connections to be made, networks to fall into, things to be seen, places to eat, events to attend, activities to enjoy, and memories to be made are seemingly exponential in this mammoth of a city.  For every unfamiliar face I see comes a realization that there are so many faces to make an impression on.  It reminds me not to sweat the little things and encourages me to find what makes me unique.  To find, more specifically, the track that will set me apart from the rest, and the track upon which I will find the most value.

I take little stake in being in this program.  Sure, I had to put together a compelling application and speak articulately in an interview. But at the end of the day, I had a family with the support to push me to apply, teachers who taught me how to write eloquently, and mentors who impressed the importance of timeliness and communication skills.  Without these influencers, who is to say I would have had a fighting chance against any other applicant.  Perhaps this theme is why I feel daunted by the idea of going after big dreams in this industry.  Who am I to be in this position?  Who am I to go after a CEO or GM position, or be the next Commissioner of a league? However, since I find myself in MSBA 2016, now armed with the skills I have been lucky enough to learn, and the network I have had the fortune of acquiring, who am I to not acknowledge these or capitalize on them?  While I often wonder who I am to find myself in these lucky positions, and furthermore use them to go for more, if this summer has taught me anything, it’s this sentiment: Who am I to not?

So as I step onto the train headed to my next adventure, I feel more ready to get after it than ever before.  I feel energized to go after greatness in the sports business industry, and lay down my own unique tracks.  The dichotomy that New York has impressed upon me pushes me towards determination, a determination to make my track exceptional, meaningful, and distinctive.  So as my train speeds into the black tunnel before us, although the darkness will always be daunting, I have faith in the tracks below me.