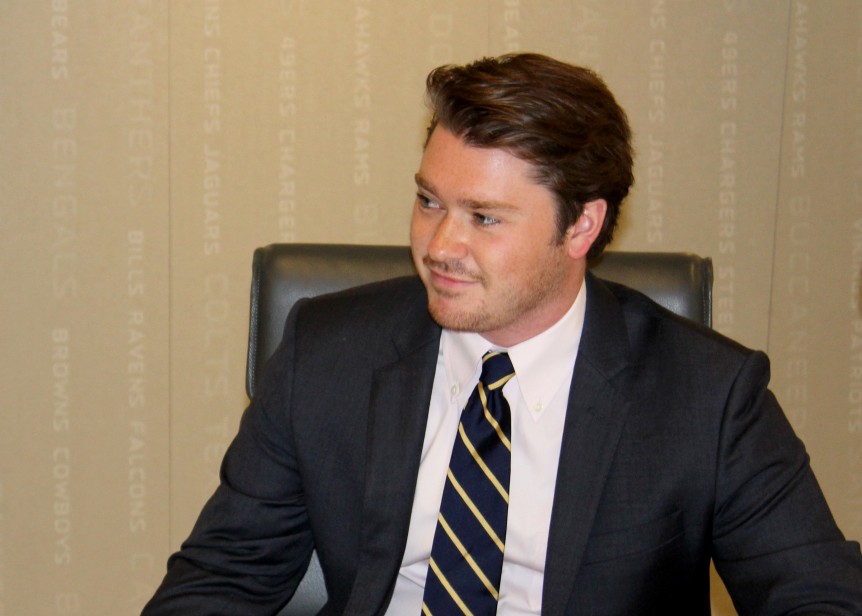 On Friday, my fellow MSBA 2016 classmates and I had the privilege of touring the MLS offices and hearing from four employees who are tirelessly working to build the MLS brand in the United States. While Soccer is known as the world’s game due to its heavy popularity overseas, its rise in the United States has been relatively slow compared to leagues such as the NBA, MLB, and NFL.

“I was taught growing up that in order to be successful you had to take risks and not be afraid of the unknown. Deciding to take part in MSBA was in essence entering the unknown for me. Now, after almost seven weeks in the program, I must say the risk was well worth it.”

It was interesting to hear the MLS employees’ take on how to properly grow soccer in the United States. My internship with Relevent Sports deals specifically with some of the top European soccer clubs in the world: Barcelona, Real Madrid, Chelsea, and Liverpool to name a few. At first, it was my belief that the MLS should rely on the European leagues and attempt to model themselves after those clubs and leagues. After visiting the MLS, however, I now see that it is less about simulating the European soccer experience, and more about creating our own unique soccer culture in America.

What the MLS conveyed to us during our visit is that they have so much opportunity to grow as a brand, and they would like to do so organically. They only have 20 professional teams, a number they hope grows to 28 in the coming years, and they already have plans to implement expansion clubs in Atlanta, Minneapolis, and Los Angeles in the next five years. They compared themselves to the “NFL in the 1950’s”, a statement that alludes to the tremendous opportunities that the league has on its horizon.

That being said, reading back on what I just wrote brings to mind how crazy this summer has already been.

Just to go back for the sake of story, I was on a train back to Boston following an interview for an entry-level production job with MLB Network. For an aspiring journalist and avid baseball fan, it would have been the perfect job to land out of school. Sitting on the train, I found myself bored and unenthused with what I was doing. I asked myself, “Do I really want to be sitting at a computer screen, editing highlights clips for the next few years?” In the years prior, I had always lied to myself and said, “Of course I do, that’s what I went to school for.” But at that moment on the train I knew it wasn’t for me. I wanted something more; something hands on, something that could allow me to make a difference in the sporting world.

The reason I love sports is its ability to bring people together. No matter what someone’s background or history is, for a few hours on any given day people can put aside all their differences and come together for a common cause. With the current state of the world, I believe sports are one of the few ways humans are able to unite. I didn’t believe sports production would allow me to help people do so.

Fast-forward a few weeks: I found MSBA’s website and realized a close friend had participated in the program a few years prior. I asked her what her thoughts were and the first thing she said to me was, “It’s a risk since you’re graduating … but if you want a job in sports there’s no better place to go.”

I remember having the conversation with my parents and telling them that instead of securing a full time job in the field of journalism (my major while at Boston University) following graduation, I was going to pull somewhat of a 180 and enroll in an eight-week sports business program. They were skeptical of course, and so was I at first.

However, in my mind I was taking a calculated risk. I may have been taking one step back, but if so it was only so I could end up 15 steps further than where I would have ended up if I decided to stay the course and become a journalist or news producer. I was taught growing up that in order to be successful you had to take risks and not be afraid of the unknown. Deciding to take part in MSBA was in essence entering the unknown for me. Now, after almost seven weeks in the program, I must say the risk was well worth it.

The relationships I’ve made through the program – whether it be my fellow classmates, the MSBA staff, my co-workers at Relevent Sports, or the many sports business professionals we’ve had the opportunity to meet throughout the course of the summer – are relationships that have positioned me for future success in more ways than I could have ever imagined when I moved into the MSBA dorms on June 5th.

MSBA gives you a leg in the door, but how we fully enter that door is completely up to us. While it may seem daunting, if you’re courageous enough to enter into MSBA, you’ll be through that door and down the hall in no time.