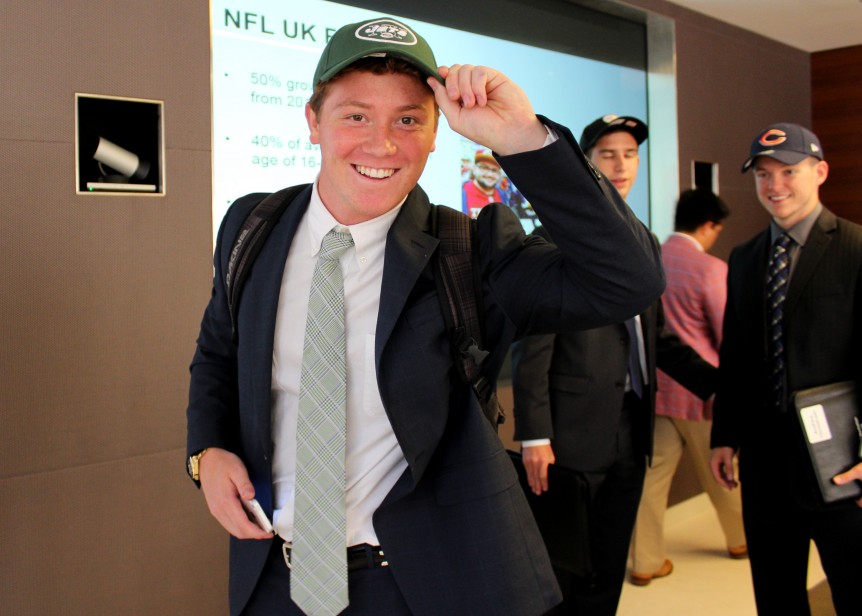 Wow, what a weekend in MSBA 2016. This weekend was a special one for me because it was my birthday, and where better to celebrate than New York City? Not only was I fortunate enough to be in New York on my birthday, but I also lucked out because Thuzio (the company I’m interning with this summer) was changing offices, which meant I got to work from home on Friday. Don’t get me wrong, my office is a great working atmosphere, but nothing quite beats working from home. With my weekend already starting off great it was only up from there, as our MSBA Friday Field Trip was to the NFL Headquarters!

“We made it up, and as the elevator doors opened the hype became real – we walked out to an encased Lombardi Trophy and a display of every Super Bowl ring dating back to 1967.”

To say I was excited was an understatement. Being that I was conveniently working from home, I made my way to the NFL offices about an hour early. Eventually the rest of the MSBA class rolled in and we gathered for the usual huddle before we went up to the offices. This time though Lorne added to the hype by spelling out very clearly that we were not allowed to spend too much time in the office lobby loitering in awe, which obviously just led to us wanting to see the lobby that much more. We made it up, and as the elevator doors opened the hype became real – we walked out to an encased Lombardi Trophy and a display of every Super Bowl ring dating back to 1967. Personally I think the most impressive ring was from 1969, but then again I may be a little biased being a Jets fan. We heard from two great speakers at the NFL: Mark Waller, EVP of International and Akash Jain, VP of International Commercial Development, both of whom were incredibly versed on international businesses development. I learned a lot of great things from them, some of which cannot be shared, but nonetheless it was a fantastic time and an unbelievable experience.

After the NFL offices, I went to meet some old friends on Stone Street to get my birthday festivities started. After a while I went back to the MSBA dorms to change and get ready for the long night I had ahead of me (as I may or may not have thrown myself a party). That in itself was a lot of fun because I went back with my old friends who in turn met some new MSBA friends, and we all embarked on the night together. I got to the party and it was great to see so many familiar faces from so many different places all gathered in New York. After sweating it up on the dance floor (and maybe pulling a hamstring) I made my way back to the dorms to finally call it a night.

Saturday morning I took the ferry home to New Jersey to spend the rest of the weekend with my family chilling by the beach. All in all it was a great weekend.