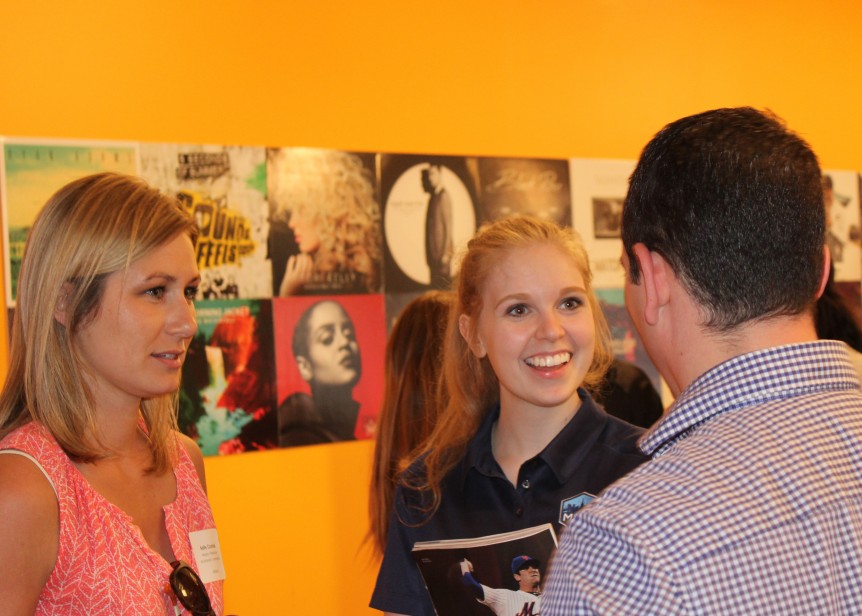 When I found out I was going to be the blog writer for the Day 4 Kickoff Celebration, I was so incredibly excited! This event was held at MSBA Internship Provider Cogent Entertainment Marketing on their building’s rooftop, which not only provided a picturesque view, but also gave us an office full of inspiring people where incredible business transactions happen daily.

“I couldn’t help but smile at how well MSBA did in setting up this relationship. My Mentorship Collective all got along so well, and they were all so genuinely interested in helping me achieve my goals.”

Day 4 was my favorite day thus far. This week I began my internship as the Digital Marketing Intern at Roc Nation Sports. It has been one of the most tiring weeks of my life, but also one of the most fun, challenging, rewarding and exciting. On Day 4 I woke up and took the train to work, where I monitored the social media accounts of Roc Nation athletes; I checked for posts on Twitter, Facebook and Instagram regarding the athletes’ partnerships, ensuring each athlete was meeting all contractual obligations. I then searched for fan tweets, which is one of my favorite parts of the job, and decided what posts were best for the athlete to either retweet or reply to. After work, I went over to Cogent for the Kickoff Celebration to meet my Mentorship Collective.

As part of the fifth year of the MSBA program, MSBA decided to revamp and improve the Mentorship pillar with the introduction of Mentorship Collectives. The Collective is made up of a Mentor (a seasoned professional with substantial leadership experience), a Junior Mentor (a rising star with a proven record of achievement) and an Alum Advisor (a former MSBA student making their mark on the industry). In addition to seeing them at the Kickoff Celebration, we will see them at the MSBA Mid-Summer Gathering, the Commencement Ceremony and whenever we choose to meet up during the summer and beyond!

Luckily my internship did not start until Day 2, which allowed me to meet with my Mentor on Day 1. I was so excited to meet the person behind the impressive resume and incredibly nice e-mails. We were going to meet for coffee, as we had previously discovered we are both coffee addicts, at Macchiato. Little did I know, there were three Macchiato’s in NYC. I ended up going to the wrong location, but we got that sorted out and then met in the middle! He probably thought I was crazy as I arrived at our middle location running down the street, dripping in sweat. I wanted to make a good first impression and was so worried he would have written me off after that incident. These worries were alleviated as soon as I saw him – he gave me a big hug, told me not to worry about the misunderstanding, and said he was so happy to meet me.

My mentor is David Hochman, Specialist in Business Communications at Major League Baseball – so cool, right?! Anyway, our “grabbing coffee” turned into talking for almost two hours! We discussed his past experiences and how he got to where he is, my past experiences and how I got to where I am, and everything else in between. From family (he has the most adorable baby girl!) to sports teams to my dreams and ambitions, he gave incredible insight and advice on the eve of my first day at my internship. We said goodbye as our first meeting came to an end, and I was honestly sad to leave! I could not wait until Thursday’s event where I could see him, my Junior Mentor, Kelly Czumble and Alum Advisor, Shae Fanning.

To my surprise, David handed me a Mets book when he arrived at the Kickoff Celebration, as he had remembered that I said I was a big Mets fan (unlike him, a Yankees fan). That was such a thoughtful gesture, and something that I appreciate more than he knows. It was funny because I had brought his daughter a “Future NYU Graduate” shirt, and I couldn’t help but smile at how well MSBA did in setting up this relationship. My Mentorship Collective all got along so well, and they were all so genuinely interested in helping me achieve my goals. They cheered so loudly for me when I introduced myself in front of everyone; I honestly felt like the kid in the school play who had their entire family including second and third cousins in the audience to support them. We agreed to all get together for lunch as soon as possible, and keep in close contact as the summer progresses. I could not have asked for a better “squad,” as they called themselves.

My first week of MSBA 2016 is coming to an end, and to say it’s been an amazing week would be an understatement. I’ve made friends faster than I ever imagined, I’ve learned more in just a few days than I ever imagined, and I can tell this summer is going to go by faster than I can imagine. I really want to thank Lorne, Bailey, Brandon, Jakob, Ben, David, and my 24 classmates for making this experience all that it is. Every single person I’ve met here is incredible, and the fact that the MSBA team saw that greatness and potential in me too means more to me than words can express. I will take in every minute, say yes to all experiences and I will not let them down!