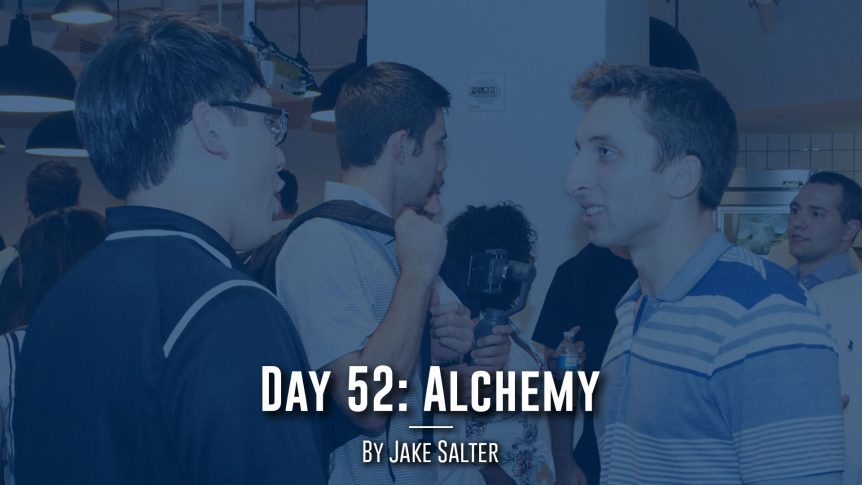 Author’s Note: The Alchemist by Paulo Coelho has been one of my favorite books since I was seven years old and read in a Sports Illustrated blurb that it was Derek Jeter’s favorite book (back when SI was just a magazine…crazy I know).

“There is only one way to learn. It’s through action. Everything you need to know you have learned through your journey.”

This summer has been a blur. The weeks have felt like days, and the days like weeks.

Any free time I’ve had this summer has come at a cost, meaning I’m blowing off something productive I could be doing. Still, this has been the most fun I’ve ever had in one summer … it’s just highly concentrated fun.

Between regular MSBA programming, my internship at Cogent, my music venture (shameless plug, but check us out at www.bronxtalemanagement.com), and my new part-time gig with the Yankees, I haven’t really had a chance to take a step back and appreciate what a journey it has been.

“The secret of happiness is to see all the marvels of the world, and never to forget the drops of oil on the spoon.”

There is a balance. This excerpt of Coelho’s piece is taken from a chapter where Santiago, the protagonist of The Alchemist, is given the task of carrying a spoon filled with two drops of oil around a palace. When he returns, the “wisest of wise men” asks him what he thought of the Persian Tapestries and the garden … Santiago had no answer. So he tries again, this time taking in his surroundings in great detail. When he returns, no oil left in the spoon.

To me, this is about the dichotomy of appreciating beauty while staying focused on what is important. Before these eight weeks with MSBA, I might have said that these two are separate, that there is a give and take. Through my experience this summer, it has become evermore clear that, in sports, one facilitates the other and vice versa. I’ve come to believe that a continued appreciation of the business behind the sports industry, and why the people who work in it do what they do, can drive your focus and inspire you to go further.

That chance to appreciate the program for what it is finally manifested itself on Tuesday night. With a force. Day 52 will always be special to me. It was our last Speaker Series event of the summer.

“All the mayhem before and after the event was worth it. I appreciated every smile, laugh, and handshake that took place. It was hard not to, as the genuine sense of community was undeniable.”

Mark Zablow, Founder & CEO of Cogent Entertainment Marketing and host of the “How I Got My Job with Mark Zablow” podcast, brought together six MSBA Alumni to be a part of a special episode. The podcast featured Alums from 2012 (Samson Feldman), 2013 (Ryan Mckenna), 2014 (Kahlil Keys and Scott Baum), 2015 (Riche Leveille), and 2017 (David Huston). The audience consisted of the Class of ‘18 and a few dozen others, including various other members of previous MSBA classes. If you ever had any doubts about the legitimacy of the program or the whole “next generation of sports business leaders” thing, I would point you to the list of organizations that were represented in that room. The NBA, Thuzio, Madison Square Garden, CAA, Octagon, Live Nation, Mission Athletecare, and Wasserman are just a few that come to mind. On the surface, it speaks to the impact of the program but, looking closer, it also speaks to the drive and resilience of the people who make the program what it is.

“There is only one thing that makes a dream unachievable: the fear of failure.”

Throughout the event, a common theme was resilience; each panelist possessed a certain relentlessness to push through adversity and ambiguity because they recognized what was important. They did not fear failure … it served them. I’ve been making a conscious effort to frame failure or rejection in an educational context.

I was tasked with securing a venue, securing recording equipment, and setting up for the event. Not going to lie, it was a smidge stressful in the moment because there was a lot to do, but it was worth it 10 times over because of the nature of the evening and the wisdom that Mark and company passed down to my MSBA classmates. It almost didn’t happen.

“When you want something, all the universe conspires in helping you to achieve it.”

We were on a tight schedule setting up because the space was occupied until 6pm. At about 6:02pm, shit hit the fan. After unloading and setting up the recording equipment, we found out that the circuits for the in-house speaker system had apparently been fried a few days earlier. We had tested the speakers when I toured the facility the week prior, yet things don’t always go as planned. Actually most of the time, they don’t. Feeling sorry for yourself or passing blame is a waste of energy. After a brief panic attack and exorbitant amount of cursing under my breath, I shifted my focus to remedying the problem.

Luckily, the studio we had rented the microphones and mixer from happened to have brought along two stand-alone speakers that we could rent at an additional cost, just in case. In a time-crunch, I told them to go get them before I even asked Mark to approve it. Mark held true to his character and approved it. Disaster averted.

Although I wasn’t able to able to give my undivided attention for the duration of the podcast recording, I took note of the incredible warmth in the room. All the mayhem before and after the event was worth it. I appreciated every smile, laugh, and handshake that took place. It was hard not to, as the genuine sense of community was undeniable.

I am grateful to Mark, David, and the MSBA team for trusting me to make it happen.

“I’ve learned things from the sheep, and I’ve learned things from crystal, he [Santiago] thought. I can learn something from the desert, too. It seems old and wise. ‘Why do they make things so complicated?’ he asked the Englishman one night. […] ‘So that those who have the responsibility for understanding can understand,’ he said.’”Imagine if everyone went around transforming lead into gold. Gold would lose its value.’”

I’ve heard people in testimonials say that everyone should apply for this program and, while I agree the Manhattan Sports Business Academy is dope, it really isn’t for everyone. If you’re not ready to stay up late, take initiative, and crazy enough to take the road less traveled, stay home.

The beauty in the MSBA experience is the flexibility it gives you and your classmates … the opportunity to make it your own. For me, the experience has been organized chaos.

That’s all she wrote folks, we out.

No shout outs this time, but rather …

… thank yous from the bottom of my heart to:

The 2018 Fam – Y’all are amazing and I love you. Stay true. See you soon!
Lorne, Bailey and David – Can’t thank you enough, hope to stay in touch. Appreciate it all!
Mark Zablow – For actually being the man. Keep keepin’ it real. Thank you for everything.
G+B, my mom, and the rest of my family – Everything I have and am is thanks to you. I love you!
Jeff Fischer – Thanks for everything, especially being there and when I don’t.
Brian Jungreis – Thank you for taking an interest in me. Best wishes to your wife/family.
Fred Stillman – Appreciate you mentoring me despite a jam-packed schedule. Link up soon.
The MSBA Alums – Appreciate all who came before us. Thanks for paving the way.
My non-MSBA friends – Y’all are cool too. Much love.

Peep the side hustle #BXAllDay