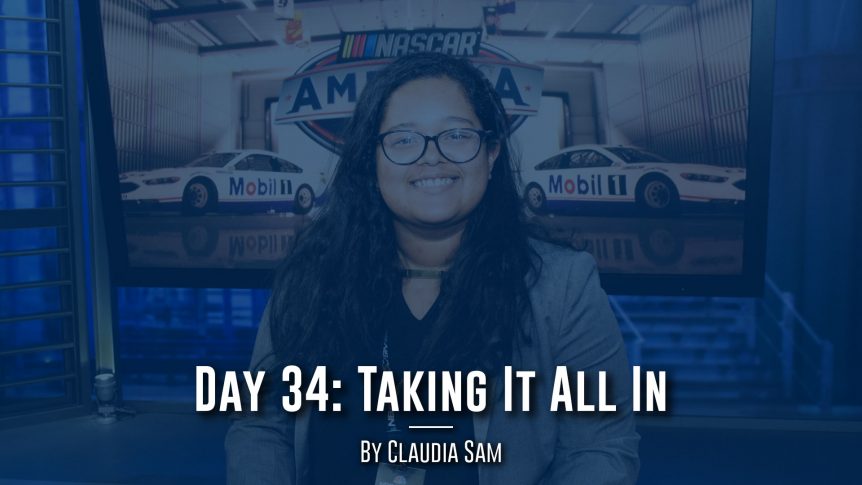 Some of my best memories growing up were with the Metro-North Railroad. It may seem bizarre to equate some of my happiest moments with a train, but I can’t put into words what I felt when I would get on the 8:01 am train to Grand Central to go to work with my mom, or taking the train into the city with the kids from my neighborhood for a day of exploring. My dad and I would drive to the Fleetwood train station to wait for my mom to arrive at the usual 6:05 pm train coming in from the city. Fast forward to now, living in the Dominican Republic and staying with family in Westchester during the summer, I still experience the same feeling when I hop on the Metro-North every day for work, just like my mom used to do eight years ago. On Friday, I got to add another great experience to my list of memories: visiting the NBC Sports offices in Stamford, Connecticut.

“After having the pleasure of experiencing something like MSBA and hearing from so many people and what they do, I’ve realized that the sports industry is so much more than what I thought it was.”

Going into the city as a kid was overwhelming in the best way. There were always so many people and so much going on that, when my mom used to hold my hand to get me through the crowd of people at Rockefeller Plaza, I would always think that she had the best job in the world just because she got to work in New York City. One of the things that I’ve learned through MSBA and through the various Speaker Series and Office Field Trips that we’ve had is that the sports industry is small, but it is so much bigger than I thought it was. Coming into college as a Sport Management major, my first year I remember thinking to myself, “there’s only so many sides to this industry”. After having the pleasure of experiencing something like MSBA and hearing from so many people and what they do, I’ve realized that the sports industry is so much more than what I thought it was. Even though we’ve been extremely lucky to visit different offices and listen to different Speakers, I’ve noticed one common denominator: everyone seems to speak so passionately about what they do. This was exactly the case at NBC Sports with Marc Iacovelli, Kelly Higgins, and Craig Kaufman. Actually visiting the NBC Studios I see on TV was surreal, and it brought me back to the same feeling I would get when I would walk with my mom to work in the city: pure amazement.

One thing that stood out to me the most from the presentation was the simple phrase, “We connect fans with the teams they love”. There are so many facets to this industry, whether it’s player representation, journalism, sales, etc., but the underlying commonality is passion and the sheer excitement and connection that not only fans have for their teams, but that players have for their sport and that people have for their jobs in the sport industry. To me, sports are about excitement, passion, and getting those indescribable feelings when your team triumphs or fails. What was so striking about NBC’s Authentic Fan initiative was that it’s centered on the fan and the feelings that are evoked through that connection that they have with their team. I feel like that’s been the inherent topic of this past week: human connection. Whether it is with a regular brand or team, everything always comes back to that simple connection and feeling. I can confidently say that almost everyone I’ve listened to or spoken to this summer through MSBA is extremely passionate about his or her work, but also about helping us figure out what we want to do.

I feel like this MSBA class is so special because we all carry that drive to succeed in this industry (shoutout to Lorne and Bailey for selecting such an incredible group of people). My internship at DREAM, as well as MSBA, has taught me so much in such a short amount of time. I feel extremely grateful to have the Mentors that I have, but also to be interning in an environment where every single person wants you to succeed. I’m incredibly fortunate to be working with the people that I do, and it all ties back to the message of human connection that Ed O’Hara was transmitting to us this past week. This whole MSBA experience would not have been the same without the rest of the squad, and meeting each and every one of them has been one of my favorite highlights of MSBA. It feels great to be in New York and reminisce about my childhood trips on the Metro-North, but I’m excited to create new memories – it’s safe to say that my train ride to Stamford with the MSBA squad is up there on my list of favorites.