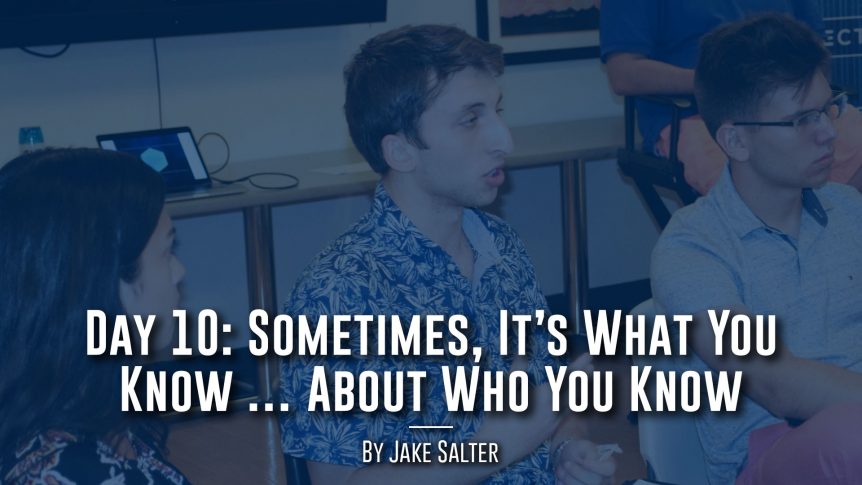 Anyone in the Sports or Entertainment industries, or anyone who has tried to be, can attest that it’s not what you know, it’s who you know. That assertion has been drilled into my head on a damn-near weekly basis since my first BSSF meeting of my freshman year in New York City. The Business of Sports at Fordham, which was founded by visionary alumni Louis Frangella and Mike Sansarran, along with the Society of American Baseball Research Student Affiliate, were my first opportunities to begin to understand the nature of the industry I wanted so badly to penetrate.

“…the game-changing differentiator in actually participating in the MSBA program is the opportunity to apply what you learn and implement these methods in a variety of real-life situations.”

It’s not what you know, it’s who you know.

Anything can become cliché when you hear it enough: that mantra is no different. When you hear the same thing from everybody in the industry, you might be inclined to tune it out or begin to take it for granted. It’s a trap, man. It’s easy to get complacent. It’s easy to say, “I’ll do it later” or wonder, “is this really that important to my objective?” It’s easy in modern society (especially in New York City) to think about whether you’re worthy of the cards you’ve been dealt or the people you’re surrounded by. Jason Belzer, Founder of GAME, Inc. and Forbes contributor, dubbed this psychological obstacle “The Resistance;” it’s part of human nature and it’s not going anywhere anytime soon, he said. It’s easy to succumb. Deal your own cards.

Resisting the resistance is crucial to be successful in your craft, whatever it might be. It requires awareness, but also practice and due diligence.

Alex Rosen, Counsel for Major League Baseball, drilled this point home on Tuesday night: demand for positions in the Sports industry far surpasses the supply for said-positions. “People would kill to be in that position,” said Alex, explaining that to “grow your web,” it is necessary that not “every interaction is made in the context of trying to get a full-time offer.” When you’re inquisitive and don’t try to be something you’re not, relationships can be built and sustained.

A lot of the tangible information in the MSBA curriculum is accessible somehow, whether it be through books, articles, or even this blog. I’ve definitely learned some of the concepts in a class here and there and heard similar stories at the Business of Sports Symposium at Fordham, but the game-changing differentiator in actually participating in the MSBA program is the opportunity to apply what you learn and implement these methods in a variety of real-life situations. After Alex explained to us why building your brand and monitoring your social media output is important, we had a chance to put what we learned in action. We split up into pairs and had three five-minute conversations in a semi-controlled setting, then received customized feedback. Good stuff. Better people.

In my internship at Cogent Entertainment Marketing, I’ve had the opportunity to work on many different projects in music, sports, fashion, and lifestyle. I really lucked out there. I find myself communicating with a wide-range of personalities on a daily basis; that doesn’t even include the 28 wonderful people I get to see every day (including our two interns, Grace and John, and the offensive line of the team, Lorne and Bailey). There is nothing outside of the Manhattan Sports Business Academy that affords its participants this convenience. It is something I am eternally grateful to be a part of it.

Going back to the aforementioned mantra of aspiring sports business professionals, the whole “it’s not what you know…” thing, I realized during one of Alex’s anecdotes that it is what you know that separates you from the pack. Due diligence and excessive preparation for every potential interaction are both part of what it takes to stand out when everyone else is trying to do the same. Knowing something unique about one of your superiors can be a turning point in your career. Alex told us that, early on in his career, he had researched every person of importance that he might share an elevator ride with. So, when he found himself in the elevator with an executive who went to the same high school he did (albeit many years prior), he was ready.

This is hardly the only example of due diligence paying off that we’ve heard about in the first week-and-a-half of Speakers. Our first Speaker, David Oestreicher, Co-Founder of MSBA as well as Founder of the most popular intramural app in the country, REC*IT (now “IMLeagues”) and an all-around superstar of a human-being, told us a story about his time on the come-up with the National Basketball Association. He told us how he researched the executives he might end up in an elevator with (yes, apparently the term “elevator-pitch” is aptly named). So one day he ends up in an elevator with one of these guys. He knew this guy loved Broadway shows and knew which play was his favorite. David was ready. That guy on the elevator was Adam Silver.

There is a plethora of additional anecdotal evidence that parallel the message of these two stories. Rosen sent out over 1000 emails before anything materialized and managed to maintain a positive attitude and eventually Rob Manfred, not yet the Commissioner, forwarded his email to someone and helped him get his foot in the door! It is this type of resilience that inspires me. I still remember Nick Sette, the former president of BSSF and SABR, telling me he was reaching out to 500 people a month his senior year, and now he’s killing it at MLB Advanced Media.

Details man! The little things. Beyond the many stories we’ve heard and advice we’ve received, I knew MSBA was a great decision when I realized the incredible thought that went in to my MSBA experience. I’m telling you, Kobe Bryant could do half a season of “Detail” about Lorne and Bailey just doing the Mentorship pairings. It was so obvious that Jeff Fischer of BSE Global, Fred Stillman of Excel Sports Management, and Brian Jungreis of You First Sports were each carefully selected to help with different aspects of my professional development.

To my classmates who might be intimidated by the daunting process of breaking into the sports industry, trust it! I can already see the greatness in all of you. Truly. They say you subconsciously absorb the qualities of the people you surround yourself with. I should be so lucky.

G&B, Louis Frangella, Mike Sansarran, Jeff Fischer, Brian Jungreis, Fred Stillman, Mark Zablow, the Bronx, and, of course, the Class of ‘18. Thank you for everything.